Surf at Bogue Pier ranged from low of 79-degrees to a high of 86-HOT degrees  with an average of 81.7-degrees (blue). Bogue Sound had a Low of 81-degrees and a high of 89-degrees with an average of 84.7-degrees (red). Another amazing month, after a cold Jan, Feb, Mar and Apr. May started about 60 degrees and from mid May to the end jumped an amazing 20 degrees or so to 4th of July water temperatures. Now July was has peaked at 86 in the surf. And guess what, surf fishing still stinks. The highest summer surf temps I’ve seen in the 20-years of so I’ve taken data were in August 2005 when the surf remained in the upper 80s for the entire month maxing at 88-degrees. 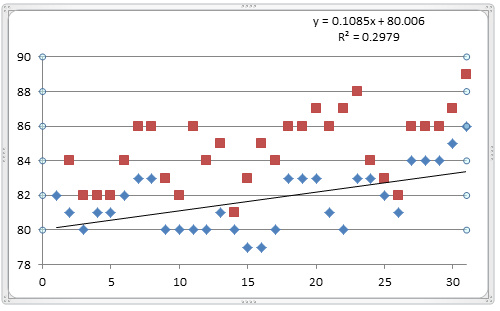