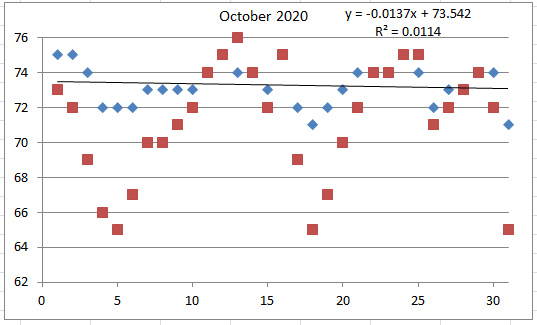 Emerald Isle Water Temperatures for October 2020
Surf at Bogue Pier had a Low of 71°, high of 75° only a slight 4° difference, with an average of 73.3°, and again above normal for the month. Sound had a Low of 65° and a high of 76° and an average of 71.3°. October’s surf and sound were mild and basically flat throughout the month, during a month we often see a noticeable drop-off. By the end of October we had a season total 27 named storms now well into the Greek Alphabet and more forming into November. Check out the graph, blue diamonds are the surf, red squares are the sound temperatures.