I’m (Dr. Bogus) a scientist so I always like to look at things from the scientific viewpoint, so when I saw the article by South Carolina fishing and outdoors writer Brian Cope on noise and designing noisy baits I thought that was a really interesting article. One of the things about that is we know that fish hear, how DO fish hear and how do we use that to create useful baits?

According to Cope, fish can hear in two ways, first high frequency sounds through their ear stones called otoliths inside their heads and secondly they “hear” low frequency vibrations through their lateral line, which you can clearly see in most fish, it’s just a line running down the center of their body lengthwise along each of their sides.

So what do they hear?

There is something we need to know about sound in the air and water…the scientist in me of course.  If we have a thunder storm and, we’ve had some lately, if you see a lightning strike somewhere, the thunder and other noises travel about five seconds/mile in the air. On the other hand in water, sound travels really fast, about one-second/mile. Some of the early baits, some of the early things we were trying to make noise with are corks. And also, I know when I fished as a kid, popping plugs, those were some of the first ones. Brian, where did you start trying to use baits that make noise and mimic fishy sounds?

“Popping corks were the first that I remember ever intentionally making noise,” said Cope, “ to try and attract fish and that really was the only thing that I ever used or saw anyone else use for saltwater anyway for a very long time until Rat-L-Traps came along certainly for bass in freshwater. Interestingly they are not really popular in the saltwater world even though they do now make Rat-L-Traps that are for saltwater use, that have the corrosion resistant hooks.” 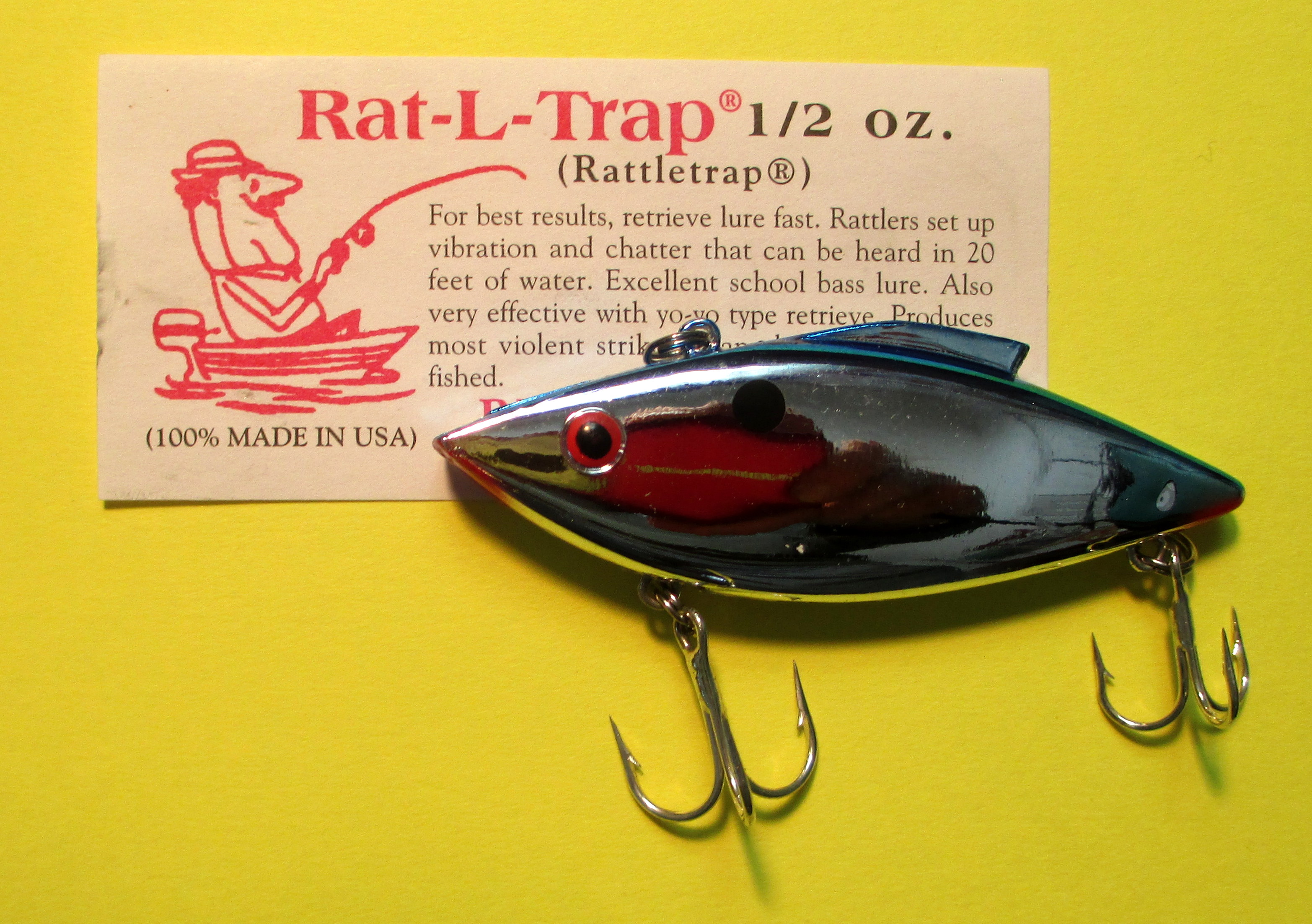 It’s interesting, you brought up the Rat-L-Traps Brian, here’s one right now (rattle sounds), and that was one of the first…Bill Lewis came up with Rat-L-Traps for freshwater  bass fishing back in the 1960s. And you were absolutely right, it took people a long time to put hooks that didn’t dissolve after one use in saltwater, because they really are an excellent bait. As far as noisy baits, this was probably the first one, and is still great.

“As we all learned when we were kids,” said Cope, “you don’t want to make a lot of noise in the boat, your feet banging on the boat, or the paddle hitting the side of the boat, things like that are going to alarm the fish and send them scattering, but they are going to be attracted noises that sound more natural to them, like bait fish normally make.”

These days there are many baits with rattle noise makers, what are some good examples Brian?

“MirrOlures and YoZuris and even some of the Super Spooks have noise makers in them, those are definitely good ones that are really similar in what the Rat-L-Trap does,” explained Cope.”

“There are also soft baits now that can make noise with small rattles, said Cope,. “like the Vudu rattling shrimp.  You know the Vudu shrimp has been around for a few years now; it’s a really effective bait. They make one know that has a little chamber in it that you can slip a rattle or weight into, and those are similar to what the bass world started using years ago that bass anglers would just cut a slit in the soft plastic and insert a little rattle. But they fell out and it was hard to do with slippery hands, but now the Vudu shrimp just has an actual chamber that the rattle that comes with it slides into.”

For those who are not familiar, shrimp are noisy critters, snapping and popping as they move through the water feeding or escaping the jaws of a predator looking for a snack.

“You can definitely hear the shrimp making noise” said Cope, “if you are around at the right time and I’m sure it sounds different to the fish but they certainly do make noise especially when they “pop” their tails to move.”

Brian, I use a lot of top-water baits and I assume you do too, some of those baits emit different frequencies.  Have you found that either the high pitch or low pitch clickers are more effective?

“Well, yes certainly are on different days,” explained Cope. “I‘ve never found one that absolutely works under certain conditions, but I’ve found that if you have a variety of them on board with you, you can usually find one that works from one day to the next, and if I had the scientific background I maybe would be able to tell you why that is, but I do know that is certainly makes a difference from one day to the next. The obvious thing is to try the different ones until you get success.”

We talked about the Rat-L-Trap which didn’t get used in saltwater until more recently, but another bait that was really popular in freshwater was the spinner baits, the bass buzz baits and we are finally getting to realize that they are effective saltwater too. They also make a lot of noise and vibrations.

“Yes,” smirked Cope,  “and you know they’re still, at least in the circles that I run in not used as often as I think they should be.” “A lot of them are people that bass fish and they go to the beach a couple of times a year and they don’t want to buy a bunch of new tackle so they just take their bass gear with them. But certainly spinner baits and buzz baits early in the morning can be extremely effective on redfish and trout and just as effective as they are with bass.”

Like with any of the other baits there is a lot of variation, long skinny leafy blades, big round ones, they all work at a different level at the fish.  Do you have any preferences Brian?

“Well the Redfish Magic is a saltwater spinner bait which is a little different than most freshwater spinner baits,” said Cope “mainly because of it being made for saltwater and having the corrosion resistance, that’s my favorite.”

Anything new and exciting out there, high tech maybe, Brian?

“One of the most unique ones I think out there is made by Livingston Lures,” said Cope. “These lures have electronic circuit boards in them that make noise and unlike just plain rattling noises they have recordings of actual bait fish sounds that are turned on when the lure gets wet.” 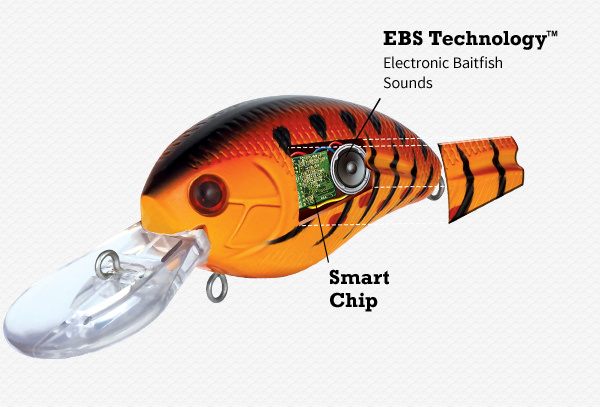 Wow, have you used those baits and have you found them to be effective, Brian?

“Yes I have used those baits,” said Cope excitingly. “I really love those baits and in some circumstances they can really make your day when nothing else is biting and like any other bait I’ve ever used I’ve also had days when I really didn’t have a lot of luck with them.” “It’s just another case of having a variety of lures on board with you and going through then to find something that works.”

Do you think those Livingston baits as they become more popular; the price will come down on them?

“Hopefully so groaned,” Cope. “I think they are $15-$20 right now. Those baits actually have adjustable sounds in them. You can shut them off or select from several different sounds.”

Have you find a sound that works best for you or do you just try them all?