That ding, ding, ding, off in the distance is a clanging bell chiming in the start of the spring fishing season. To some, that sound rings in the wakening of the redfish up in the marshes, to others, early season blowfish and sea mullet from the surf and piers. For the big tackle angler it ushers in their first trips to Gulf Stream and The Big Rock for yellowfin tuna and for us light at heart, the visions of streaking hickory shad at our other “Big Rock” on the Roanoke River, on all but the lightest of tackle.

With this in mind, last week I met Capt. Dean Lamont (Raleigh) at the Wildlife boat ramp in Weldon, along the Roanoke River, to give these feisty fish, the poor man’s tarpon, a try. As a guide, Lamont has been making this yearly spring pilgrimage to the Roanoke for migrating shad and later in the spring, transient spawning stripers too.

“Of course the reason the shad come up the river,” Lamont reminded me, “is that they are one of these fish that spawn in freshwater even though they live in saltwater. The shad in the Roanoke River as an example, travel about 160-miles from the ocean all the way here to Weldon where they spawn.” “We’re really blessed in NC,” explained Lamont, “we have a number of rivers where shad come in. We have the Cape Fear River, Northeast Cape Fear River, the Neuse, the Cashie, actually they come up nearly every one of our rivers.”

Of these rivers, the Roanoke is special geographically speaking. “It’s at the fall line of the Piedmont and the coastal plain,” said Lamont, “and especially when it’s low water, you basically cannot go up river boat ramp at all, because the river is just filled with boulders and rocks, so you put your boat in and you go VERY carefully down river.”

Taking this hazard warning seriously, many anglers prefer inflatable boats or aluminum hull boats. “That way if you bounce off a rock,” said Lamont, “you don’t put a hole in your gel-coat, or worse, you just put a dent in your aluminum and you can pound it out!” “That’s the nice thing about the Neuse River, explained Lamont, the Neuse River can be a lot muddier, but at least you don’t have to worry about the rocks.”

We got on the river at about 10:00 AM with more spinning gear and fly rods darts, garishly colored flies and spoons than two shad fishermen should need. Lamont eased his 17-ft flats boat gingerly around the group of “bank” anglers and into the streaming river.

The shad are a small but real sporty fish and a lot of fun on lightweight rods. “You can either fly-fish or spin-fish,” explains Lamont, “normally what I use is a six-weight fly rod. Early in the season, the shad are down deep in the water column, so when you are fly fishing, you need to use a sinking line with about a 200 to 250- grain line.” “Of course it depends on the river flow, how fast the river is flowing and how deep the water is,” Lamont said perusing the river.

For us coastal anglers, Lamont suggests that a light-weight speckled trout rod would maximize our fun, so I pulled out the trout rod I had with me, actually a 6-weight fly rod at birth, now transformed into my favorite spin trout rod and equipped with a 2000-class spinning reel, 10-pound braided line and 8-pound test leader. Perfect, I was ready for shad. 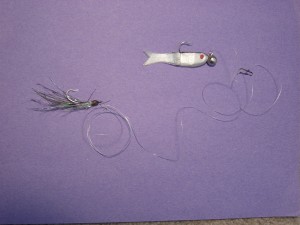 The river is still very cold, it would never get above 49-degrees today and the river level was very low as well. “I don’t think I’ve ever seen the river as low as this before during shad season,” observed Lamont. Although this means more rocks to contend with, it perfect for shad fishing. “The lower the river level normally, the better the shad fishing,” said Lamont, “because the shad are more concentrated in the river compared to being way up into the banks or the side creeks.”

Watching for submerged rocks, we eased across and a little down river not far from where we had launched. We were already marking fish on our fish-finder in about six to eight-feet of water, so we anchored up. Lamont rigged his fly rod with a tandem fly rig, consisting of two small brightly chartreuse flies and started to cast back and then forward finally letting his fly sink in the current. I rigged with a standard shad-rig, consisting of a shocking pink shad dart trailed by a very small silver spoon. Gold colored spoons are fine too.

“The best way to do it, either for fly or spin-fishing,” demonstrated Lamont “is to cast perpendicular (to the boat) across the river and current flow and let your line sink as it’s swinging around with the current. Normally by the time it gets straight out behind you or down along the bank a little bit if you are bank fishing, when you start reeling in that’s when the fish will hit.” That’s the theory anyway. We got hung on the bottom a couple times, and lost some gear, but didn’t entice any shad to eat our colorful baits.

Interestingly, shad are not supposed to feed during spawning season, but they clearly will take these artificial baits. So I asked Lamont, why to they eat (hit) them? “That’s a good question,” smirked Lamont, “what I hear from a lot of people is that you really need a lot of shad in the river to catch shad, and mainly because they aren’t really feeding.” “I think they just sort of strike out at the lure, maybe you are invading their space or something like that,” said Lamont. “So when we are talking about the lures and flies, I think it is important to mention that the gaudier and brighter, the better off you are,” emphasized Lamont, “you want that shad to be able to see these flies and for whatever reason for them to strike out and hit it.”

Well, they weren’t striking here, but just upstream of us, closer to the fall-line, on the seam of some white water and a back eddy current, we saw another angler, Chuck Laughridge, a longtime local from Roanoke Rapids, hauling in one shad after another on the fly. He waved us on, so we eased upstream of him, no more than two or three boat lengths away and anchored up front and back with a couple of mushroom anchors to stabilize the boat. With Laughridge still landing fish, we tried both flies and shad rigs to no avail, really pointing out the importance of location, location, location, and how critical just a small difference of position, missing the flow seam was in catching or not catching fussy, cold shad.

The shad bite slowed a bit even for Laughridge, so we all moved down stream only a mile or less from the ramp and anchored at what is known as “The Big Rock”. You can’t miss it, it’s pile of rocks and big to boot. There is also an aromatic discharge from a water treatment plant and the rocky granite remnants of an old bridge on each side of the bank as well as submerged mid river. The big rocks provide some calmer water, out of the fast moving current. As Laughridge would point out, resting places for cold, tired fish.

Again marking fish, we anchored again front and back to keep the boat from moving side-to-side. We could see Laughridge landing fish, as he held up his hand indicating he had already caught five shad. We could also see a fisherman along the muddy clay bank hauling two in quick succession, from along the shore. Encouraged, we started to work the pooled and protected areas near the rocks. Finally success, Lamont hooked and landed one on a fly, followed mere moments later by my first success of the day. We could actually see them rise up from the bottom and hit our lures and flies, then jump into the air, go back down and jump again. The poor man’s tarpon maybe, but at the very least the light-tackle angler’s dream for sure, jump and run, run and leap. What a blast!

By three o’clock the water temperature nudged to almost 49-degrees, the highest it would get today and the fish were biting as good as they had all day, and now we were finally having fun. We probably landed a dozen fish or more, mostly visual strikes…the best. 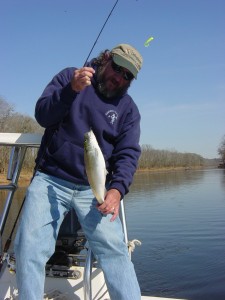 It was getting late in the afternoon so we decided to work back up to near the fall-line to once more try our luck. Again we marked lots of fish, without any strikes. Too cold, too lazy, wrong seam, who knows. Lamont says, “one more cast and we have to get out of here.” He casts his fly into a nice seam along the eddy current and yells, “There’s one, get your camera, feels like a big one, a good one a real good one…it’s…it’s a catfish,” exclaimed Lamont, as it came up to the surface. A nice sized catfish indeed, and on the last cast of the day! “I guess you never know what you’re going to catch, even a catfish! I knew it was a big one!” I took the picture and we released the catfish. 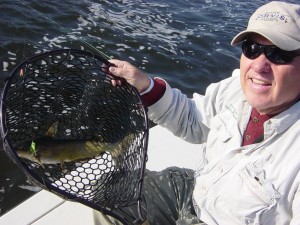 We pulled up the anchors, and as we approached the “bankers”, the bank fishing anglers, who numbered at least 10 by now, we could see each of them continue to pull in leaping shad from the shoreline. At the ramp, there is a nice current and eddy seam that holds the shad close to the bank, easily reachable from the shore and you don’t need a boat. It was undoubtedly the hot spot for the day. Although you don’t need a boat, like all of us who fish the Roanoke for shad, stripers, or whatever, you do need a fishing license, and be warned, the Weldon area is a frequent stop by NC Wildlife officers. Count your fish, and have your license ready.

Although we marked scads of shads today on our sounder today, the early season cold river water provided only a slow and sporadic hickory bite. Forecasts for the next week are more spring-like, with temperatures soaring into the 70 or even 80s. As spring takes hold, the warming water should get the shad to explode both figuratively and literally, since they are already there.

How long will the bite last? “It normally depends on the water temperature,” explains Lamont. “Once the water temperature gets to about 60-degrees, the fish will spawn and then they will immediately start heading back down river, back to the saltwater. One of the reasons I think they head back down river right away is because the striped bass will then be coming up the river and they don’t want the stripers to eat them,” smiled Lamont. The food chain in action.