Today I’m talking to Jason Peters, Coordinator of North Carolina’s Artificial Reef Program.  Welcome Jason can you give us a brief history of NCs AR program, then we will talk about the new AR Reef Guide.

“So, I guess back in the 1940s and 1950s there was a lot of interest in fishing hard bottom but one of the major issues was the hard bottom habitat was so far offshore,” explained Peters,  “so grass roots effort began to put material a little bit closer to shore.” “It was fairly disorganized and there was no real standard of what types of materials to use.” “There were bath tubs, washing machines and things like that,” chuckled Peters, “and so and they worked for a couple of years they would rust away and be gone.”

“Then in the mid-1980s” said Peters, “the state took over from the individual permits that existed out there and set a standard on how we would build artificial reefs.” “One of the things that we do preserve is the idea that we want to improve access so we try to build reefs that people can get to that they can fish. Since the 1980s we’ve been chugging along we’ve been building lots of reefs we’ve got 62 now including the estuarine reefs and we try to enhance anywhere from two to four a year by sinking ships of putting concrete pipe and things like that.”

One of the reefs that has been enhanced recently was AR-330 when you sank the a ship renamed the James J. Francesconi in honor of Jim* the former coordinator of the AR Program.  So how did that sinking go Jason? 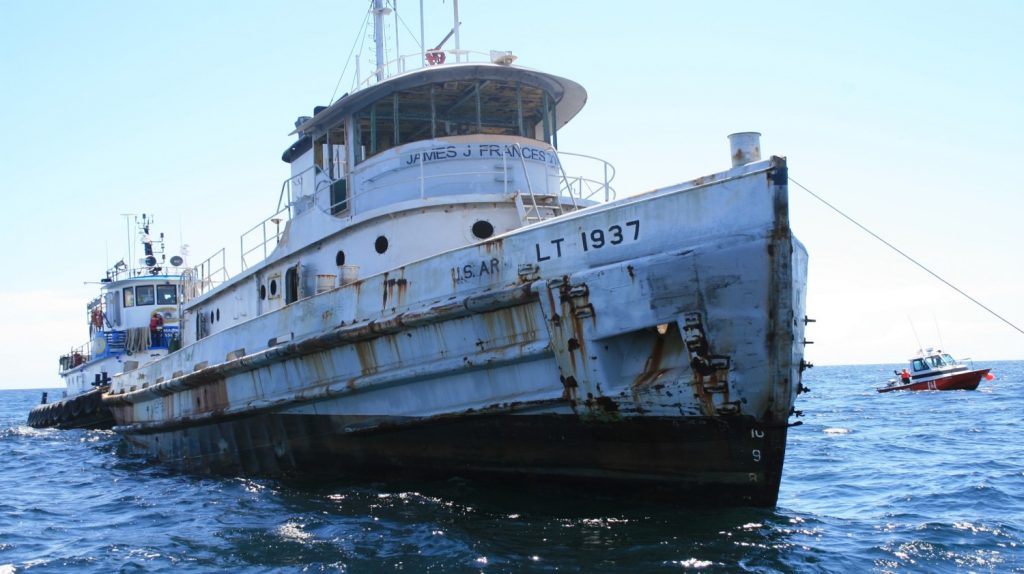 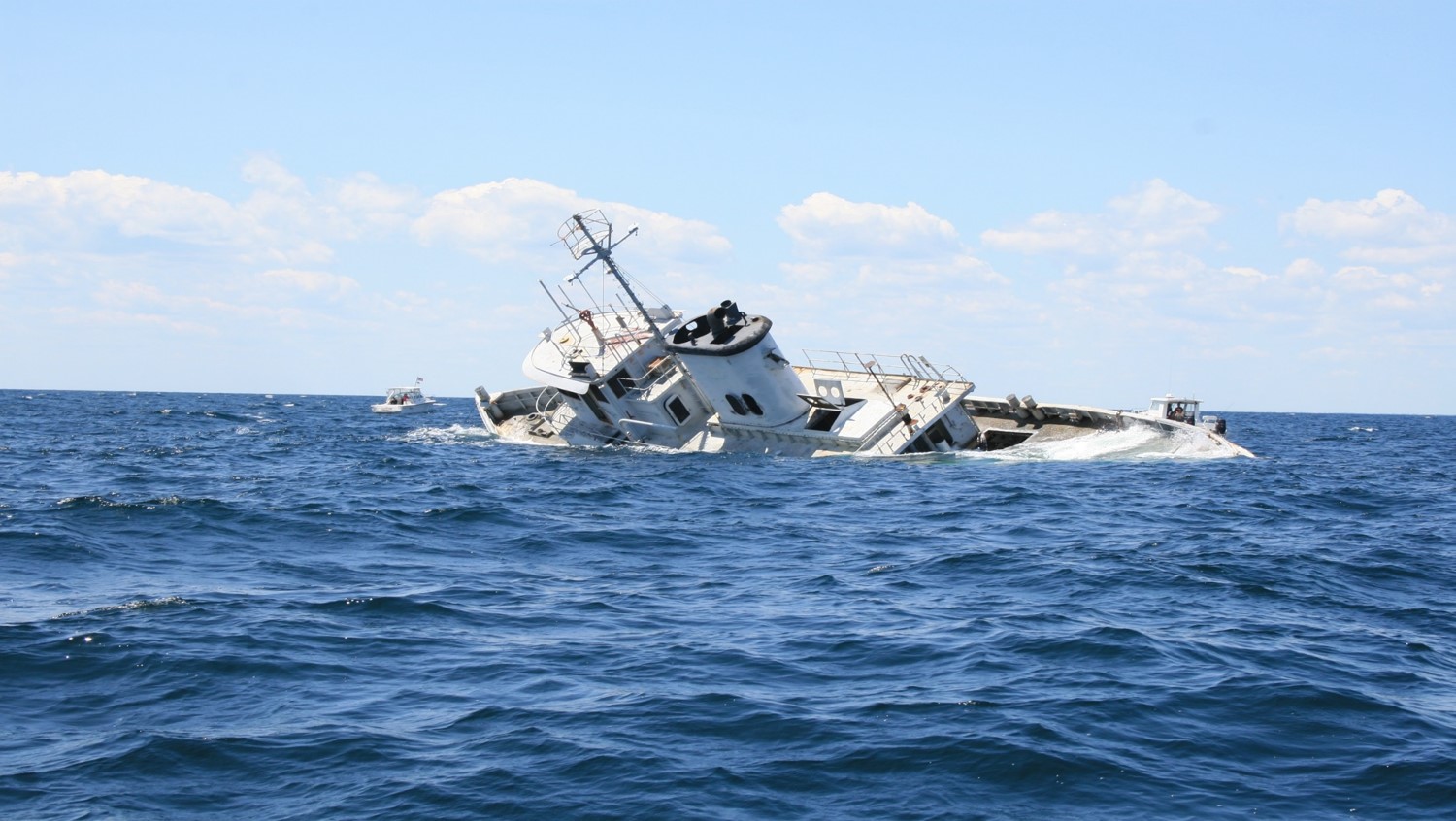 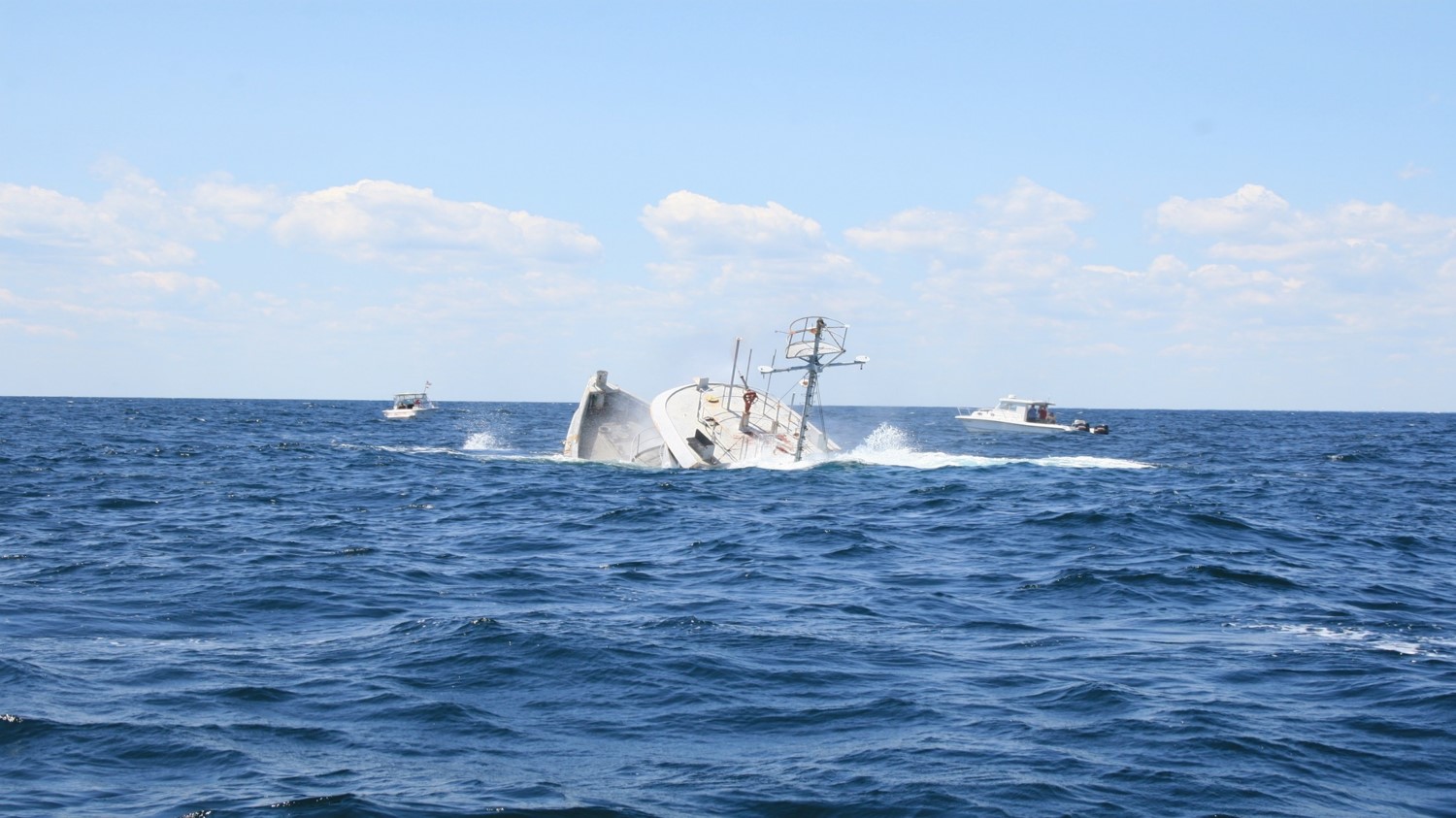 “Well it’s always stressful,” sighed Peters, “when you sink a ship; there are so many things that can go wrong.” “Even a potential for people to get hurt, but everything went off without a hitch, very-very well, sank right to the bottom, didn’t roll or anything. We actually sank two vessels, they are both upright right in line as we planned, clearance is about 17-feet so we meet all out permitting requirements and from what we hear there are tons of fish on them and the visibility is great.” 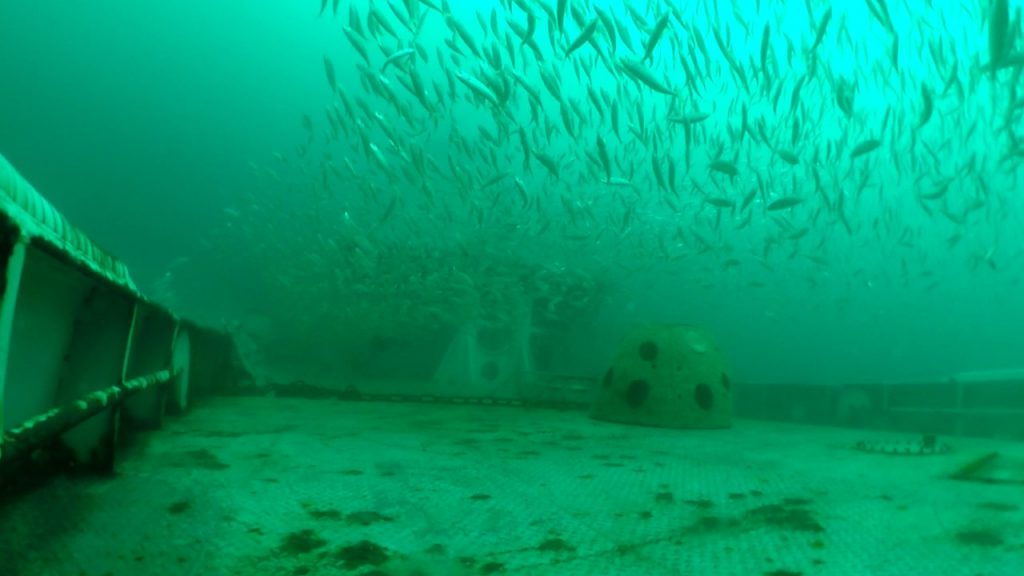 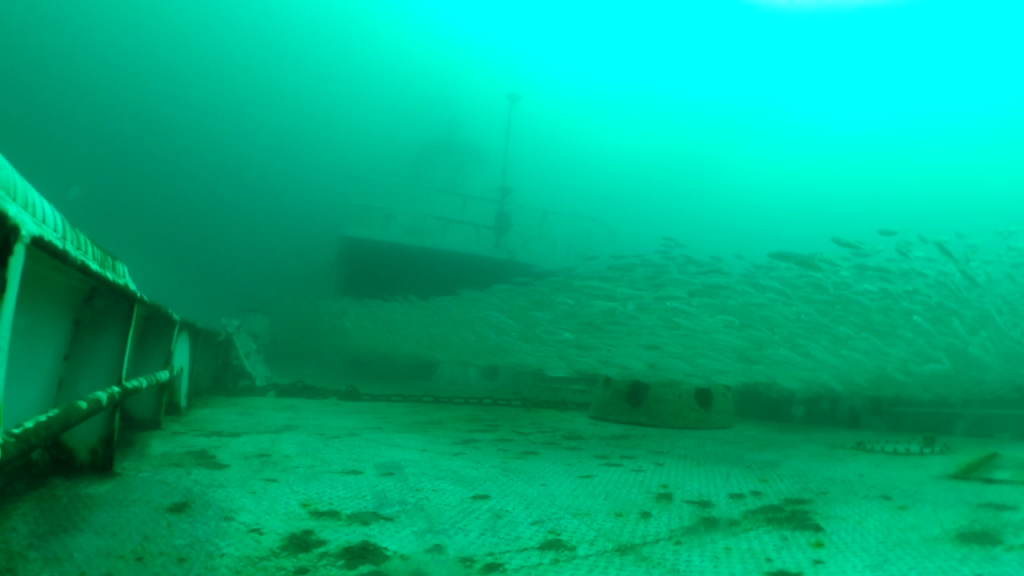 Now to the NEW Artificial Reef Guide. If you go to NCDMF website or stop in their offices in Morehead City, they have available their new AR Guide. I’m holding in my hands the original AR guide, done by Stephen Murphey back in 1995! It has nice hand drawn pictures of boats and rubble and concrete pipes and LORAN numbers which have to be translated into some other language for us to understand them right now. So Jason, the new reef guide which was paid for by our Coastal Recreational Fishing License (CRFL) fees by the way, can you give us an idea of what it looks like, how it’s organized, then we can get into the interactive reef guide on the NCDMF web site.

“I’ll start off by saying we’re really proud of this,” exclaimed Peters, “it’s been over 20-years since the last publication and there are a lot of people that put in a lot of time into this particularly Amy Comer-Flowers, and Rachel Love-Adrick, that really created this and edited it.” “What you will get when you pick this book up is…so it’s a spiral bound book and it’s got water-proof pages. Essentially we have every single artificial reef in North Carolina, so all 62 reefs. It’s broken down into sections by bays in the ocean. All the reefs in the Outer Banks is in one section, Raleigh Bay which is from Cape Hatteras to Cape Lookout, Onslow Bay, Long Bay and then our estuarine reefs.” 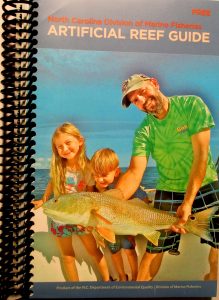 “And if you go to any particular reef,” said Peters, “you get a table and you get a map.” “So the map is outlined reef patches that are based off of side-scan sonar imagery that was collected in the last 5- or 6-years, and an identifier. And that identifier number will link you back to the table where you can read about the material type, when it was deployed, and get GPS coordinates for each one of those patches. On top of that for each reef, you get provided the magnetic direction and distance from nearby inlets.

I noticed in the guide book that you can write in your own notes.

“Absolutely,” said Peters, “we got a little note section so that as your fishing it as you decide which patches you like best or what you’re catching or different conditions you can write down your notes and go back and hopefully recreate the scenario the next time you fish.”

Now on these reefs you have “patches” of stuff, how were those generated where you have clusters of the pipes or the ships or whatever?

Sure, so as I mentioned, each reef was side scanned or has been side scanned in the last 5- or 6- years,” said Peters, and “CRFL funds actually funded a staff member to outline each one of the patches in GIS (Geographic Information Systems) or a geographic mapping program, and that’s how we got those. What you see is actually what’s on the bottom.”

I noticed that it was really up-to-date since you even have the boats you recently sank this spring there at AR-330. You ran out there and touched up, did the final touchups before this got printed.

“Yes,” smiled Peters, “we wanted it to be the most up-to-date, the most accurate version that we could provide.”  “I think the plan is every few years, maybe 5- or 6-years we’ll try to come up with and update.”

Another really big advantage, if you go to the Marine Fisheries web site portal is that the new guide has a user friendly interactive web site, with simple to follow short tutorials. Can you explain how that is set up and how the sonar side-scan data is represented?

“We’re trying to keep up with the times,” explained Peters, “so we’ve gone digital with our reef guide.” “There’s an on-line version, an interactive version that you can find on our web site (http://portal.ncdenr.org/web/mf/artificial-reefs-program). Essentially you get all the information that you can get in the printed guide and then in addition to that there are some mapping tools that help you determine distances for example, and distances between patches. You can also create personalized maps of certain areas on reefs that you can print out.”

I noticed that you can create like a polygon or something around a particular area, mark that or print it out or preserve it.

“That’s exactly right,” said Peters, “ if there’s a certain portion of a reef you really like or you want to zoom in on you can zoom in on that and print it right out.”

“That’s a good description,” agreed Peters, “that’s actually the description that I use to explain it to people, it’s a lot like Google Maps where you can zoom in.”

I also noticed that when I was running a cursor over something you get the GPS locations of any one of those spots.

“That’s correct,” said Peters, “if you find a patch you like you can click on it and there will be a little pop-up window that will give you GPS information, material information and actually in some cases with the vessels there are links to the history of the vessel that was sunk there so it you are a history buff you can get a little background information on that vessel. Also with the zooming tool, you can see individual pipes and reef balls and things like that, it’s real neat.”

So Jason, what are the plans of the artificial reef program, what can we look forward in the future?

“We’re very-very active”, spirited Peters, “we have a lot going on. “Particularly this year we’re planning on sinking two vessels at AR-320, that’s the Novelty ship site off Atlantic Beach, so hopefully if all goes well we’ll get that done sometime this late fall or winter or early part of 2017 depending on how the cleaning process goes with the vessels.” “We’re also looking at two brand new artificial reefs that will be estuarine artificial reefs in Carteret County in Bogue Sound. One potentially in Cedar Point and one in Atlantic Beach, so we’re in the very early stages of planning that out. We’ve got an enhancement project down at AR-430 down off Oak Island, that will be about 4,000 tons of concrete pipe and we’ve also got some work proposed at AR-372, that’s down off Wrightsville Beach, that’s again a concrete pipe project.”

“It really is,” exclaimed Peters, “it provides great habitat, lots of nooks and crannies. And we’re also looking into a brand new artificial reef site in the ocean off the Outer Banks.”

Would that be from the Bonner Bridge material?

“Actually no,” corrected Peters, “ this would be completely new and pending a CRFL application that’s in right now and depending on whether or not that gets funded there might be a new reef up there.”

So what will be the status of the Bonner Bridge remains as they tear down the old bridge for the new span?

“For the Bonner Bridge material,” said Peters, “we’re looking at some time in 2018.” “Once the new bridge is constructed they will demolish the old one and we’ll and we’ll take that material and distribute among the four reefs on the Outer Banks.”

That will make a lot of material!

“That beats tires,” I said!

“Don’t even speak those words around here,” shouted Peters.

*Jim Francesconi who was the former coordinator of the AR Program for 14-years (2000-2014), passed away from a long bout with leukemia In July 2014. Jim was the heart and soul of the program during that time, and particularly loved AR 330.  The ship was renamed the James J. Francesconi and sunk in his honor. A plate acknowledging that is permanently affixed to the ship.