Tuna for the rest of us! By Dr. Bogus

When you hear the likes of yellowfin, blackfin, giant bluefin or big eye tuna, visions of big boats, big gear and offshore excursions may dance in your head. But if you don’t have the boat, or the gear or the big bucks to get to the Gulf Stream, there is an alternative to big-gear tuna, that is the Atlantic bonito, and the false albacore, the tuna for the rest of us. Both of these “poor man’s tunas” are nearshore pelagics, they are schooling fish, have similar diets and migrate up and down the Atlantic Coast as far north as the New England States, are accessible to the nearshore boater and often even to the surfcaster, and fight like the devil himself. 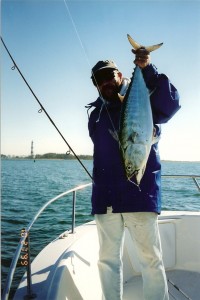 First of all, you need to tell these two similar fish apart. False albacore or little tunny (Euthynnus alliteratus) have no real teeth, few scales, wavy-wormy lines all above lateral line and dark spots between pectoral (thoracic) and ventral (abdominal) fins. Most weigh in from six- to 20-pounds. 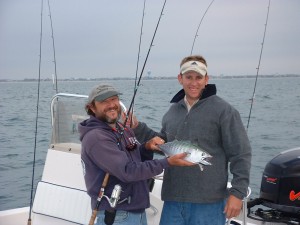 The Atlantic bonito (Sarda sarda) is a real tuna that has biting, grasping teeth, scales and distinct racing-stripe diagonal lines, that go below lateral line. The Atlantic bonito are a somewhat smaller fish that the false albacore, usually in the two- to six-pound range, but don’t be too surprised if you hook into a 10-pounder.

Both fish migrate up our Atlantic coast in the spring following 62 to 68-degree water and typically small baits like sardines, bay anchovies and Atlantic silversides passing North Carolina during April and May, on their way to New Jersey and points north for the summer. Interestingly, on their way south in the fall, the Atlantic bonito remain far offshore, whereas here in North Carolina we have an excellent fall nearshore fishery for the false albacore, turning Cape Lookout and Beaufort, North Carolina into a true fishing destination with Harker’s Island it’s fishing guide-based hub. Some of the famous celebs like former President George H.W. Bush (a.k.a., Bush #41) have made yearly pilgrimages to test the metal of these high intensity fish for instant high intensity fun.

Both of these fish will “test” your gear, your line, your drag your leader, your knots and rod as well. I prefer a seven-foot medium action rod, a 4000-series spinning reel with a reliable drag (I use Shimanos) and spooled with 200- to 250-yards of 10-pound test monofilament line or 10 or 20-pound test braid. You will also need several feet of 20-pound fluorocarbon leader to withstand the toothiness of the bonito and the keen eyesight of both of these wary sharp-eyed fish of the mackerel family.

Of course, the real challenge for tackling both of these speed demons is to catch them on the fly. Most fly fishermen use an eight-weight fly rod with 250- to 400-grain sinking line. The sinking line allows you to work from the surface on down and will also enable you to cast further with fewer false casts. As with spinning gear, make sure you have a drag that can stand up to the blistering runs of up to 20- to 30-miles an hour, a fluorocarbon tippet and again 200-yards of backing to fight the fish with.

The next challenge is finding the schooling fish. You might see surface breaking fish, but more often what you see first is birds, and remember birds means bait and bait means fish! The baits are usually small, so terns and gulls are the usual give-a-way for these smaller baits. Sometimes even pelicans can give away these small baits, the key here is to see pelicans paddling and feeding on the surface scooping up the baits, not diving from heights as is normal for them. Here in North Carolina artificial reefs and rock ledges also mean bait and fish. In general bait balls of bay anchovies or Atlantic silversides (both generically referred to as glass minnows) gather over these structures at a depth from around 20-feet to the surface. And if they are on the surface, it’s usually because the bonito and albies are actively feeding on them, pushing them up to the surface.

Here in central North Carolina the hot-spot locations include the popular nearshore artificial reefs like AR 315, 320 and 330 (http://portal.ncdenr.org/web/mf/home) and the inlet areas around Bogue, Barden’s and Beaufort as well of the neighboring Cape Lookout and Lookout Shoals. These are all in sight of the beach and easily reachable by the small-boat tuna angler.

In general, early in the day usually is better, since the bite can often be over before some people finish their first cup of coffee, so think daybreak, first light. They are often around during midday, but they are usually in deeper water and harder to locate. 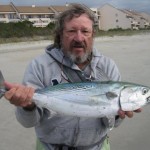 Both Atlantic bonito and false albacore are predominantly, if not exclusively caught with artificial lures and on the fly. For spinning or conventional tackle, small and shiny rules.  So called heavy metals like Stingsilvers, Kastmasters, Maria lures, small diamond jigs, Crippled Herring spoons, Deadly Dicks, and even some swimming plugs that are small and match the hatch will hook-up these aggressive fish. Depending on the wind and sea conditions, 1/8 -ounce up to one-ounce can be used if the conditions are rough or windy or the fish are deep. I prefer the lighter 1/8- to 1/2-ounce and work up from there if I need to. The heavier baits can also be vertically jigged when the fish have sounded or later in the day when they may be feeding deeper. We also use silverside mimics of soft plastic baits on a 1/4-ounce to 1/2-ounce lead jig head. White or clear are the best.

Flies? Clousers are the most popular, anything from an inch in length to three- or four-inches again depending on the hatch. These fish can often be very size fussy. If you have long flies, all it takes is a snip here or there to cut it down to the feeding size of the day. Popular colors white, olive over white, chartreuse or pink with some flash to mimic the shiny stripe of the anchovies or the aptly named silversides.

Fishing the schools, position your boat up wind (or up current) of the school and drift towards them. Rushing the schools will sound the fish to the depths and you will have to start over again. It is also a way to ingratiate you with the other boats in the area, so courtesy first, you’ll get your chance. Bonito and albacore fishing combines periods of waiting and looking, followed by intervals of pure frenzy.

Both albies and bonito are fast swimmers. The albies will hit like a freight train, the bonito have a slight pause before they take off. Make sure your drag is set light enough to take the hit and blistering run, if not you will loose most of your fish by break-off. Both these fish will tend to go out and deep runs of 100-yards are likely. At the boat they also go deep and zig-zag back and forth, which can be a problem if there is more than one fish on. Those crazy double headers! To finally land the tired fish, reach down and grab them by the tail or net them. Sometimes these fish can brought to the point of exhaustion; so if you wish to release your catch, remove the hook and plunge the fish quickly, head first, back into the water. This will give the fish a quick rush of oxygen and help reverse the lactic acid build up in the fish by forcing fresh water through their gills. 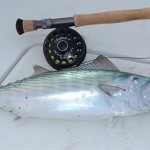 In many areas from North Carolina up to the New Jersey coast and north, these fish, especially the false albacore, can also be targeted from the surf. Tackle and artificials lures are the same, but landing a 10-pound fat albert from the beach in insane. They hit hard, so don’t set the hook, then they run out from and often streak down the beach stripping line against drag as they go. Green lightning! Some of the most fun I’ve ever had not catching a fish were the times I didn’t land a false albacore from the surf. Sometimes they break the line, sometimes they pull out or even straighten the hooks. From the surf I usually use a 1/2- to 3/4-ounce Kastmaster. On the beach, these fish are hard if not impossible to chase. If they are in the area I wait for them to come to me and cast in front of fish running down the beach.

Finally, to eat or not to eat, that is the question. Most agree that the Atlantic bonito makes excellent table fare, especially loined-out like any of the bigger tunas, to remove the dark red flesh along the lateral line. Its meat is actually noticeably lighter in color than the yellowfin tuna, which has a marked redish color. Unlike the Atlantic bonito or the true albacore, most people don’t find the false albacore particularly haute cuisine, so most are released to swim another day. Personally, I find the flesh of both the bonito and false albacore on my dinner table. Like the bonito and other tunas, you again need to loin-out the fillets, removing all the dark meat yielding four loin strips of some of the nicest tuna meat you can imagine, as suitable raw for sashimi with some wasabi-soy sauce for dipping, as it is fit for blackening too. Bon appétit! 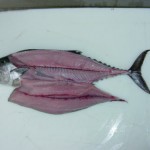 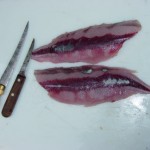 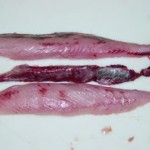