Would a Pogy by Any other Name Smell as Sweet? By Dr. Bogus

Remember the Mason-Dixon Line dividing North from South? Philly cheese steak versus shrimp and grits, hot tea or iced sweet tea, blue and gray, Yankees and Braves, and then there are the animal weather prognosticators, Punxsutawney Phil and of course Raleigh’s own Sir Walter Wally leading us into an early spring or dooming us to six more weeks of winter.

As an angler, another difference you will notice immediately traveling from north to south or vice versa is the variation of common fish names, what I call misnomered regionalisms, i.e. names dependent on geography, like Hatteras blues, and boy can it lead to confusion. Different geography, different names, same old fish. Here are a few to orient us northerners to the southern fish names and vice versa.

First of all let’s start with our revered state fish, Sciaenops ocellatus, a.k.a., the red drum, redfish, channel bass, puppy drum, bull redfish, bass, sea bass, spotted bass, spot tail, red rat, pescado, colorado, and branded drum. As table fare of course we know it as blackened redfish, popularized by Cajun chef Paul Prudhomme, nearly leading the red fish, as it is known to our south, into extinction. Its name of drum comes from the drumming sounds produced by the males during courtship and often when caught as well. All the many members of the drum family drum, drum, drum, away. Seems proper that our state’s piscatorial choice is a fish of many names.

Another relative in the drum family is Cynoscion regalis. In the cold white north, this is a weakfish or weakie, due to its fragile mouth and not a downtrodden personality. The Indians used squeateague, but there are more, how ‘bout, just trout, or sea trout, squit, squetee, sheantts, chickwick, succoteague, drummers, saltwater trout, gray sea trout, sun trout, shad trout, yellow-finned trout, yellow-mouth trout and yes summer trout. Up north, citation sized ones are known as tide runners aaaaaaaaaand here in North Carolina of course just the plain old gray trout, the well known kissin’ cousin to the spotted sea trout or speckled trout.

The ocean’s pan fish, the spot, is yet another but most diminutive member of the drum family, also has many regional nomen, such as Norfolk spot, spot croaker or Lafayette, so named in 1824 after an extraordinary catch was somehow attributed to Lafayette’s trip to America. In the fall the run of large, hormone crazed, south migrating spot are also known as “yellow bellies”, with many weighing in at over a pound. Along the piers and inlets they are some of the most popularly targeted fish every year, filling coolers two-by-two.

Another pan fish with multiple names that does it justice is the sheepshead, named for its prominent incisor teeth, resembling a sheep’s teeth. Its prominent black vertical stripes have earned it the monikers convict fish, zebra fish and pajama fish, and are often confused with juvenile black drum. Our state record is just under 20-pounds and was landed at the Bonner Bridge at Oregon Inlet. A 20-pound pan fish?

Along the beaches of Maryland one popular visitor is the kingfish or whiting or king whiting, as you proceed south to the Commonwealth of Virginia, it’s the Virginia mullet, which is the same as the sea mullet we know and love here in the Old North State. And by the way, it is in no way related to finger mullet or jumping (a.k.a., hard-head, striped or Popeye) mullet either. By the way, it’s the only silent member of the drum family!

A North Carolina favorite, immortalized in print, paint and pictures for their historic late season blitzes along the Outer Banks is old linesides, the Morone saxatilis (formally Roccus saxatilis). In the Chesapeake it’s the rockfish, here just striper (not stripper) or striped bass, but also has more archaic names as squid hound and greenhead. This is a noble fish with a mystique that many have chased from Maine to North Carolina. Recent regulatory rebound is returning this species to its legendary stature both along our beaches and in our rivers too.

Now, how about Euthynnus Alletteratus or false albacore, that lesser cousin of the tuna, which we should not get confused with the Atlantic bonito or “real” albacore for that matter. These feisty fish provide fast action in the fall as we hook and try to hold onto one of these footballs with a tail, affectionately called fat Alberts and often little tunny. By the way who would every want to go through life as “false” anything, almost as bad as “bogus”! Right?

Now the blowfish is another story. Like Rodney Dangerfield, they get no respect, they go by such unappetizing names as blow toads, swell fish, and puffers, but the notion that these delectable critters also more delicately known as sea squab or chicken of the sea are poisonous is wrong. Sure, their kissing oriental cousins have a history of death and destruction for those who dare this culinary “rush”. Puffers are of the family Tetradontidae includes many species like the Japanese torafugu that are notably toxic, but NOT our NORTHERN PUFFER. The northern puffer variety of these inflatable fish actually do taste and look remarkably like chicken and are nicely and safely prepared by gently sautéing them in lemon butter. Yum!

Speaking of lemon, how about the lemon fish, ling, crab eater, flathead, black kingfish, cabio or sergeant fish. Some think it’s shark like or even catfish looking, we know it as the cobia. They spawn in inside our waters in May and June and talk about good eats…!

One fish providing major a misunderstanding is the dolphin, please, NOT to be confused with the mammal dolphin and the beloved TV star, Flipper. To minimize this confusion we use dolphin-fish, the Hawaiian mahi-mahi, or the Spanish Dorado. No we don’t eat Flipper. These brilliantly iridescent blue and yellow fish are known for their crazed “life in the fast lane” behavior in the Gulf Stream, their amazing leaping ability and yes, their great taste.

One fish that continually baffles us migratory northerners and resident southerners alike is the flounder, specifically the summer flounder whose range is all the way from New England to North Carolina. To northerners, any flounder with teeth is a fluke, but to the native Carolinian it’s just a flounder. So if someone asks you “how’s the fluke bitin’ this year”, you’ll know their geography is somewhere north of the Mason-Dixon Line. 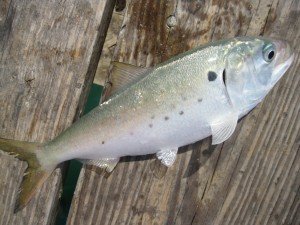 Finally there’s the poor pogie, not to be confused with the lowly porgy. A porgy of course is a tasty bottom dwelling pan fish whereas pogies, or what Northerners call menhaden, mossbunkers or just bunkers, you Southerners…pogies. Menhaden are the oily filter feeders, fast forage food for blues, stripers, red fish, and king mackerel and yes porpoises (i.e. Flipper) too. They travel in massive schools, swim in doughnut-like circles, and are harvested commercially in vast numbers. So the next time you are down wind from the Beaufort, NC rendering plant, think bunker, menhaden and of course POGY. But if you stick your nose to the air and take a whiff, you probably won’t think rose.

Photos and pictures of many of the fish described here can be found in the Fish Identifier of this web site, www.ncoif.com.

NOTE: Since I wrote this article, the Wheatly rendering plant, Beaufort Fisheries, closed its doors (2006) and the rendering factory torn down and the not so rosy aromas of rendered pogies are a now thing of the past.

Virginia Institute of Marine Science, College of William and Mary

Biosis, Guide to the Animal Kingdom for Students and Educators