“The Awesome TRUTH about Roanoke River Stripers” 06 May 99

If stripers (Roccus saxatilis) are a special mystical fish, then fishing them in the spring run on the Roanoke River (NC) is a Zen experience, Nirvana as it were. The return of the Atlantic Coastal striped bass fishery, after near extinction by the late 1970’s and early 1980’s is truly the success story of fishery management and effective conservation measures. The payoff can be seen up and down the East Coast, the rugged and rocky New England shoreline, Cape Cod, Long Island
Sound and surf, the New York Bight, Sandy Hook, Delaware River and Bay, Assateague, the Chesapeake Bay, OBX and the Roanoke River here in the “Old North State”.

Each spring when the water is fixed between 53 and 60 degrees Fahrenheit, these anadromous fish turn their fancy not only to river herring and shad, but to opposite sex as well (see Striped Bass Fishing by Woolner and Lyman). It’s spawning time and all the leaves are green and the clouds of midge flies (Diptera nemocera) haze the sunset. This run of spawn fish is Albemarle Sound based, home of the largest striper on record, a 128-pounder netted at the mouth of the Chowan River near Edenton in 1891. The stripers leave the sound traveling more than 100 miles from the salt to the brackish and finally sweet water of the Roanoke to Roanoke Rapids and Weldon, NC.

Early in the week I got a desperate e-mail message from Capt. “Fly Gordo” inviting me to Weldon for a striper fest-he used the words “I’m serious” in his message. Sex crazed stripers, spring, the Roanoke, THE RUN was on. How could I turn this down?? You all know my striper
history, from my first childhood line-sider in Connecticut, my 10 years in the Long Island surf and Montauk, rockfish in Maryland and Delaware, my trip to Maine last summer in search of the northern stocks. I slipped off from work early and wound my way from Winston-Salem to
Weldon, just short of the Virginia boarder, exit 173 off ofI-95, take a right and follow the boats to the State Wildlife boat ramp.

I parked under the tall trees, got out of my Jeep, and looked down the hill high above the river and could see the bridge and a large line of boulders to my left, boats, and more boulders extended from just below the rapids downstream. I could also see Capt. Gordo’s boat directly
below me, pulled up along the bank. As I surveyed the territory, I heard a honk and saw the red truck. Perfect, Fly’s here and I could see stripers landed from the boats, and from the bank, temps in the 70’s, partly sunny, and some threatening clouds-but not to worry today.

We boarded the 174 Cobia-CC, and off we went. Couple of light weight spinning rods with Shimano 4000, and a small Penn reel and a 8 weight fly rod terminated with lead core line and a quickie “three-step” deceiver fly. Typical spinning tackle consists of a variety of soft plastic grubs-chartreuse, white etc. On a 1/2 oz. jig head, we also had a couple of mini-spooks, retooled with single hooks, mashed down barbs and all. Gordo had “enhanced” the retooled Spook (Zara Spook) hooks with a bit of glitzy gold-flash.

The Roanoke this spring is relatively low, unlike last year when the water was high and dirty and the current swift. This year it’s nice and fishable, almost leisurely. Above and up river of the ramp the river is loaded with jutting boat eating rocks and submerged boulders, but as you drift downstream the bottom become mostly mud and more boat friendly. There are rises and holes, flats, bends and rips and dead wood everywhere, but mostly friendly. Well, let’s go fishin’!!

There was a crowd anchored near and just down from the ramp, so we worked our way away from the madding crowd, down river, a little at first, later more and more, farther and farther. At first I tried a chartreuse laden jig, bingo fish on, then another pretty good size, 5 or 6-pounds or
so. Trying an easy release I broke him off, jig and all. Gordo suggested the mini Spook, this time with a 30# leader. Can you say Albright?? Well I don’t tie knots in the day that require three hands that I can’t do at night, so I went with my favorite shock leader knot–Surgeon’s knot.
Works for me, and I can do it in the dark even while being eaten by gnats.The river is full of life, the stripers splashing–feeding, stripers splashing–spawning, spirit and power. Turkeys, vultures circling, schools of river herring huddling for safety, red tail hawks and eagles preying, wood ducks, honking egrets, a muskrat, a beaver, the midges-yes the white clouds of midges. The incredible biomass at our finger tips.

“In and above the clear-muddy-brook, and it’s just Spring!”

For hours and hours we drifted down with the Roanoke current, motored back up and drifted again. Dozens of stripers caught and released, power and spirit. Free fish trying to “eat” the Spook or deceiver from the mouth of the hooked fish swarms and schools everywhere. I even caught one without hooking. The Spook lodged horizontally across the width of its mouth, and I brought it to the boat where it slipped harmlessly off.

Finally Gordo said, “are you ready”. I looked over and said, “yes it’s time”. He handed me his fly rod and off I went. I stood at the bow, couple of false casts, sink-sink-sink’ strip-strip-strip. No surface splashes, but fish attacking on nearly each cast. The line straightens a fish is on. Each fish on the fly feels like a monster as it pulls and bends the long slender rod to a “U” under the boat back to the other side. Strip the line into the bucket and bring him to the boat. A quick release and back to a cast-cast, strip-strip. Fish on!! Unbelievable!’ On this day shooting-head
with a deceiver, or a popping bug with a floating line were both effective. Fish were aggressive, fish were everywhere. 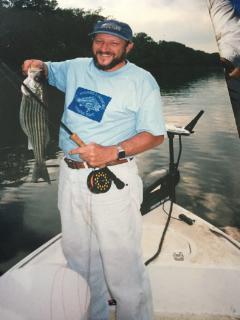 At dusk the wind laid down, the river became flat and the air a haze of midges. The stripers were still hungry, noisily rising to the surface at will. Some for sex some for food. We returned to ramp, pulled the boat and cleaned the day’s sandy grime and fishy slime off at a local coin
operated car wash. We supped simply, and tired we hit the sack early. Capt. Gordo set his alarm for 0500 hours to be ready and waiting for a group from West Virginia who I guarantee would have a day that they wouldn’t believe and will never forget. Me, I returned to Winston-Salem for another day in the lab, my expectations exceed and the realization that the exaggerated stories I heard about the Roanoke River and its stripers are grossly under exaggerated.