Surf at Bogue Pier ranged from Low of 57-degrees to a unbelievable high of 68-degrees with an average of 63.4-degrees (blue diamonds), an average of 8-degrees higher than March. Bogue Sound had a low of 57-degrees a high of 76-degrees with an average of 67.5-degrees (red squares) 12.6-degrees higher than March.  April temps steadily increased about 0.33-degrees/day. And we were above normal compared with my 20+ years of data. We normally don’t get to 68-degrees in the surf until two weeks into May. All this has brought in fish a couple weeks early and we have also had a banner month of Hatteras blues, at numbers we haven’t seen in 5-years. 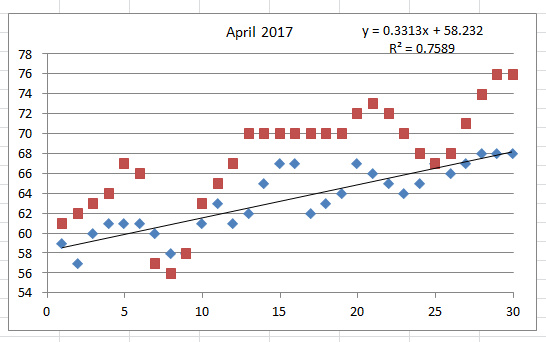