Gator encounters of the fishing kind, by Dr. Bogus

Many of us have seen the recent You Tube video gone viral with Fred Boyce, a herpetologist at the NC Aquarium at Pine Knoll Shores, wrestling a big alligator in a roadside ditch in Down East Carteret County. Boyce recovered from the arm bite and finally he and the alligator eventually went their separate ways. Score one for the ‘gator.

This fresh in my mind I recently saw a Facebook post with photos of a hissing alligator that John Mauser (Swansboro) encountered while fishing for redfish with fly fishing friend Rick Grither (Cedar Point). It turns out that Mauser is an Aquarist also at the Pine Knoll Shores Aquarium, a local fishing guide (Tailing Tide Guide Service) and a close colleague of Boyce.

With these two events just weeks apart, the question that arises is how rare are alligators in coastal North Carolina and how rare are sightings and human interactions. According to Mauser, although sightings are somewhat rare, alligators aren’t. Luckily alligators are fairly secretive, and spend most of their times in areas where we usually fear to tread, with some exceptions, in the spring when males are seeking female breeding partners or while looking for to expand their food supply.

On May 17, 2012, Mauser and Grither were testing their fly fishing skills looking for redfish in the shallow marshes and creeks, off the beaten path somewhere behind Bear Island working their way down towards the New River. Perfect areas to sight-fish for reds on the fly.

This fishing requires a shallow draft flats boat. “I’m fishing out of an Ankona Native skiff, with a poling platform a couple feet above the engine and a push-pole,” explained Mauser. “It’s quieter than a trolling motor, and you can get a lot closer to the fish, so you can actually see the fish we’re going to cast to.”

Foot and a half of water, poling their way some 300 yards up no-name creek, so where does the ‘gator come in. Who saw who first?

“I don’t’ think anybody saw anybody at first,” exclaimed Mauser, “what happened apparently was, he was lying down in the mud in that foot-and-a-half of water, maybe waiting for a red drum to come by, the water was really muddy, you could only see a few inches down.” “I pushed the boat right over the top of the alligator and didn’t know he was there at all, we were just casting to the fish, and I put the push-pole down, to propel the boat forward. When I put the pole down in the water right below the engine the water exploded underneath the engine. I thought I hit a school of redfish and then I saw an alligator sitting about four feet directly below me.”

Although admittedly excited, Mauser claims not to have been worried at this time, rather politely commanding Grither to get his camera for some cool photos. 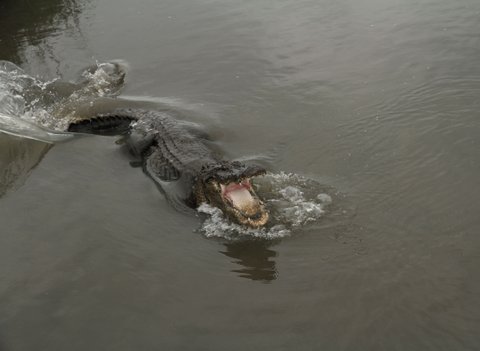 So the creek is only 25-foot wide, 18-inches deep in the middle, the boat 17-foot and an alligator estimated at seven-feet, not much room to maneuver, what next?

“He actually just sunk back down into the water,” chimed Mauser,” and I could watch a silhouette of him just below the surface as he moved down the creek”. “Unfortunately we also had to move down the creek to get out of the creek. So once Rick got the camera out and as we moved down he was maybe about 10-feet from the boat and he just came up in a foot of water with part of his body out and we got a couple of really great shots. He opened his mouth and you could hear him hissing at us. He never approached the boat, never like he was going to come after us. He basically stood his ground, showing us that this was his territory, but he didn’t actually come towards us. So we just really carefully pushed the boat passed him, trying not to make contact with him, and once the boat went passed him, he just slumped back down into the water.” 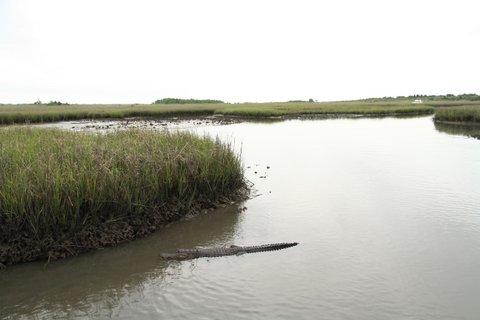 So did they catch any fish?

Mauser and Grither abandoned the ‘gator’s redfish up in the creek that day, but back at the mouth of “Gator Creek” they did catch some keeper flounder and slot reds that day on plain old-fashioned white Clouser flies.

Finally, I asked Mauser what advice would he give someone may who have an alligator encounter such as theirs.