Of water temperatures and shark bites, 2015.

Remember the Goldilocks syndrome, not too cold, not too hot…just right! I am a retired PhD chemist, locally known as Dr. Bogus and have and have taken water temperatures in Bogue Sound and in the ocean from Bogue Pier for over two-decades most of that time on a daily basis. Why? Water temperatures greatly influences the “who and when” of our migrating fish stocks, both their comings and goings with the seasons. Fish, like porridge to Goldilocks, have a lower and upper temperature comfort range and a temperature that is “juuuuust” right.

Watching the water temperatures we can anticipate the arrivals and departures of our seasonal piscatorial friends and even anticipate events such as cold stun or cold kill of sensitive fish such as speckled trout that we have seen in recent years, and sea turtle strandings too.

According to my local Emerald Isle water temperature year data 2015 was a strikingly unusual. This was the first time I have recorded ocean water temperatures in each of the months of January, February and March of under 50-degrees Fahrenheit. It was truly an unusually cold and persistently cold winter. Fishing was sluggish and turtle strandings were increased. Then during the last two weeks of May of 2015, our ocean water temperatures suddenly shot up dramatically from 70 to 80-degrees by May 30, 2015, a temperature so strikingly unusual for the end of May, as 80-degree surf is usually reserved for July 4th, and our Independence Day celebrations. First too cold, then too hot, what a year we had in 2015. This trend was the norm for the Atlantic coast in general and not only our portion that we lovingly call The Crystal Coast.

We already know the tragic results of the early warm water temperatures, the premature arrival of both north going sharks and south going bathers leading unfortunately to above normal shark-human interactions. And in response for the public safety and public concern, several local communities imposed beach fishing restrictions, with dubious efficacy.

As you can see I agree with the analysis of many scientific experts as to the reason for last year’s upsurge of shark attacks, which of course are rare, but I also wanted to add some quantitative data on local water temperatures and their effects on migratory fish species in support of their conclusions. If you are interested, check out my web site www.ncoif.com where I post much of my water temperature data for your use and information. This is hoping we all have a safe and fun 2016 beach season. 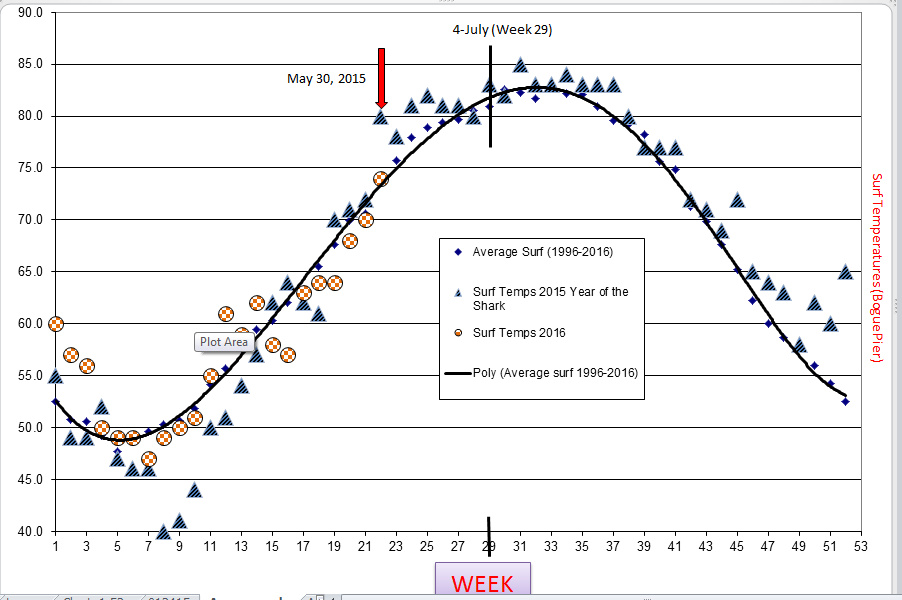