Last fall we experienced what is called a “mullet blow” heralding the start of the fall fishing season. Brisk northeast winds, cool temperatures, flushing out a myriad of finger and hardhead (striped) mullet from our estuarial waters out of the inlets and into the Bogue Banks surf. Most anglers pursue these forage fish with castnets for bait, as flounder, drum, trout, king and Spanish mackerels and yes; sharks are now chomping hot at their tails. And of course there is the Swansboro Mullet Festival celebrating the commercial catch of these important species. There is however another species of mullet, pursued for their delectable taste and feistiness as fighters for these elongated and only silent members of the Sciaenids, or drum/croaker family.

The ever popular and very edible Sciaenid family includes black and red drum, speckled and gray trout, croakers, the diminutive spots, sand perch and the delectable sea mullet. Locally these sea mullet, also known as Virginia mullet, whiting and technically kingfish, come in three flavors, the Northern kingfish, with its dark angular stripes and long dorsal fin filament, the Southern kingfish, which has lighter stripes and without a dorsal filament and the more silvery Gulf kingfish, sporting a very prominent lateral line. 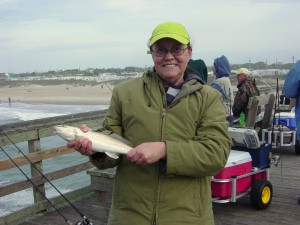 To anxious winter weary fishermen, March always proves to be the cruelest month, with surf temperatures, as was the case this as well year, still wallowing in the 50s and only a few puffers, sharks and skates being the harbingers of spring fishing. April however is the breakout when we finally see hospitable surf temperatures in the 60s, with 65° being the “breakout” temperature, and multitudes of sea mullet and bluefish finally making it to our coolers.

To get the local scoop, I talked to, Gary Mohorn, a year-round resident of Emerald Isle, local fisherman and self-proclaimed meat eater, fish meat that is. “To me,” said Mohorn, “spring fishing is sea mullet, pompano and bluefish.”

“It depends on the water temperature,” admits Mohorn, “but the last couple of years the first I caught sea mullet in any numbers was mid-March. “The spring run seems to peak in mid-April, that’s when I did the best on the (Bogue) pier.”

“Fishing the piers, the sea mullet are mostly in the deeper water behind the (sand) bar,” pointed out Mohorn. “Sea mullet seem to be a low light fish, rainy days, cloudy days, muddy water, but the best time for big numbers is at night.” Also like the spots they tend to move closer to the beach on the rising tide and work their way out to the deeper water when the tide is falling. I saw this again this year.

Spring is only the start of the sea mullet season, which carries through the summer and usually well into the fall. In fact, this year looks like one of the better mullet seasons since 2012,with Mohorn and fellow mulleters frequently filling their coolers fishing Bogue and Oceanana piers on Bogue Banks and down to the Topsail Island piers too, Seaview, Surf City and Jolly Roger. They are also showing in the deeper holes and sloughs along the Bogue Banks surf, with catches of citation fish sometimes pushing the two-and-a-half pound mark, but most fish in the 10-to 14-inch range and the bigger ones, weighing in over one-pound.

For spring, shrimp is the best bait, the very freshest shrimp that is, bloodworms and small pieces of squid will also catch plenty of fish. Later in the season, the best for the biggest fish are sand fleas, and you can scratch them up for free right at the surf line along the beach, just for the taking. The use of synthetic baits like Fishbites Shrimp ‘n’ Strips, or the Bag O’ Worms, bloodworm substitutes, are popular and very effective and Berkley flavored imitation sand flea baits, have recently come into use, but I’m not sure as to their effectiveness.

Rigging for sea mullet is simple, with the usual two-hook bottom rigs being the standard, but Mohorn makes his own with extra-long leaders. “I think the long leaders (10 to 14-inches) gives the fish an extra second or two to eat the bait and get hooked,” explained Mohorn. “A lot of times I add a small orange, red or fluorescent bead above the hook,” said Mohorn. “It works good in muddy water and low light times.” The long leaders, colorful beads, small No. 2- or 4-long-shank hooks and a three-ounce pyramid lead sinker to keep your bait on the bottom will fill your cooler. In the fall, when sand fleas are the bait of choice, some sharpies use Carolina rigs for a more natural presentation of the bait. 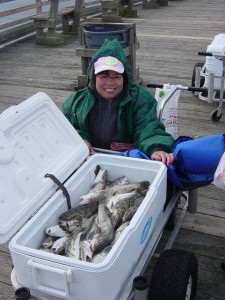 Sea mullet, can be caught along the surf from the piers or just off the beaches from the spring into the late fall. From a boat the hot spot is always the Dead Tree Hole (N 34 38.748, W 76 35.559) just south of Shackleford Banks towards the east end and there are often gray trout to be caught there too. Other areas include Beaufort Inlet and the Morehead City Port Turning Basin. In these deeper waters, weighted speck rigs tipped with fresh shrimp is the preferred terminal gear. Although it is under consideration, currently there are no size or creel limits for sea mullet North Carolina, but fish in the pound range are not uncommon, with citation weight of 1.5-pounds for sea mullet. To date, the NC record sea mullet was landed by Ted Drinnon from a Pier on Bogue Banks in 1971, tipping the scales at a hefty 3 lb. 8 oz. Wow!