One of our spring visitors showed up in good numbers this past week, the Atlantic bonito, Sarda sarda, which is a large mackerel-like fish of the family Scombridae. It is common in shallow waters of the Atlantic, the Mediterranean, and the Black Sea, where it is an important commercial and game fish. The Atlantic bonito can be distinguished from its relatives by its dark oblique stripes on the back. Atlantic bonito grow up to 30 in. and weigh 10 to 12 pounds at this size, but most three to six pounds. These fish are currently to be found all along the beaches and around the inets and over the usual artificiall reefs like AR 315, 320 and 330. Best baits are small metals, small soft plastics and if you fly fish, Clouser flies that mimic silversides of anchovies are the norm, with chartreuse or olive back, white on the bottom and some flash down the middle. The Atlantic bonito are a great tasting fish cooked and as sashimi. I like to fillet them and loin them out removing the dark center blood line.

Recent springs, have seen catches of bullet mackerel (tuna). The bullet tuna, Auxis rochei rochei, is a subspecies of tuna, in the family Scombridae, are found circumglobally in tropical oceans in open surface waters to depths of 160 ft. Its maximum length is 20-inches. Sometimes called bullet mackerel, the bullet tuna is a comparatively small and slender tuna. Bullet tunas are blue-black on the back with a pattern of zig-zag dark markings on the upper hind body, and silver below. They feed on small fish, squid, planktonic crustaceans, and mantis shrimp larvae. They are often mistaken for juvenile false albacore. They are not considered good table fare so are not usually eaten. 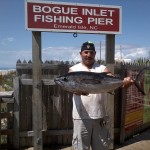 Blackfin Tuna made appearance along the beach and on Bogue Pier where Marullio Marquez landed a 21-pounder in April 2012. Blackfin tuna (Thunnus atlanticus) is the smallest tuna species in the Thunnus genus, generally growing to a maximum of 39 in. in length and weighing 46 lbs. Blackfin have oval (football) shaped bodies, black backs with a slight yellow on the finlets, and have yellow on the sides of their body. Blackfin are only found in the western Atlantic from Cape Cod to Brazil. Blackfin feed both on the surface and deeper water on fish and squid. They also eat crustaceans such as shrimps, crabs, amphipods, mantis shrimp and the larva of decapods. They are a short-lived, fast-growing species; a 5 year old fish would be considered old. They reach sexual maturity at two years old, and spawn in the open sea during the summer. Blackfin tuna are a warmer-water fish, preferring water temperatures over 68°F. What they lack in size, they make up for in numbers and willingness to bite. They make great table fare for us humans, often rated better than yellowfin tuna and make good snacks for marlin too.