We all know the importance of watching birds when we fish. It’s even a fisherman’s commandment: “Thy Must Watch the Birds”. Which of course is immediately followed by a second sub-commandment: “Thy Must Follow those Watched Birds”. We watch birds because THEY know where the bait is. Right? Right! But, what we really want to know is where the citation sized predators that feed on the bait that the birds found. Right? Right! Let’s say you’re on the beach, and the surf is full of bait as far as the eye could see. Tingling water and showers of shiny bait everywhere. Sound familiar? And birds are putting on aerial displays of epic proportions, up the beach, down the beach, “in my lady’s chamber”, as far as the eye could see!
What do you do now? Let’s consider how different birds feed. Some birds dive (gannets) and scoop (pelicans), some dive and hunt one on one (terns), others (the most fowl) swim, dive and hunt under water (cormorants, loons). On the other hand some birds don’t scoop, or dive very effectively, and never ever swim under water, but they eat just as well. The gulls!! So, if all the birds, answer the question “where’s the bait”, how do we find the FISH?
The gulls, lacking some of the awesome fishing skills of the other more “noble” birds are more opportunistic in their eating habits, hey, they’ll even eat potato chips when offered. If you watch the gulls when predatory fish are surface feeding, they fly around looking for a predator. Once found, a flock gathers, and hovers, waiting for the fish, say a bluefish or albacore, to surface and attack. Just as the fish surfaces, driving the bait to the top, the gulls dive right on top of the foraging bluefish to pick up scattering minnows, injured or killed minnows, gorfed minnows, and the favored flavored minnow bits. As we all know, blues are notoriously messy eaters. This method, although opportunistic is not without its risks, remember those gulls with only one leg? 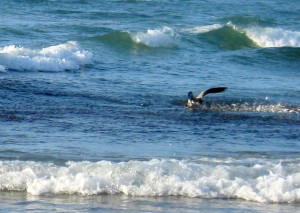 By watching birds, you can also get a good idea on the bait size the birds are feeding on and therefore the predatory piscatores that may lie beneath. Gannets, diving like missiles from dizzying heights snack on bigger baits, like menhaden (i.e. pogies), pelicans have more variety in their diets, fish big and small alike, but their dives are different for large or small baits. They dive almost directly vertical like the gannets for bigger fish and more towards the horizontal for smaller fish, or even just float and scoop for little baits. When these bigger birds are feeding, you can expect bigger predatory fish, tuna, king mackerel, Hatteras blues, stripers and such. Terns, feast mostly on smaller fish, the bigger terns will eat finger mullet and peanut pogies as well as glass minnows (Atlantic silversides and bay anchovies), whereas the tiny least terns feed on the glass minnows as well as the least of all the fish, newly hatched fry, one-by-one. Hiding beneath the terns you can often expect false albacore and Atlantic bonito, small blues and of course by May, the prized Spanish mackerel. But in a pinch, when bait and birds abound, follow the lowly gull. There’s citation fish beneath them gulls!