What a bizarre and frigid month, surf at Bogue Pier ranged from high of 50° to a low of 38° with an average of 44.8° (blue diamonds). Bogue Sound had a high of 52° a trout (and other fish) killing low of 29° with an average of 41.0° (red squares). This January was one of the coldest I’ve measured in my 25 years here in Emerald Isle, even colder than 2003. The coldest days were early in the month so we actually saw an increase as the month went on. In addition we had a super, blue, blood moon and an eclipse and king tides. Trout kill was from northern part of the state to Surf City to the south, and the season is closed until mid June by proclamation. 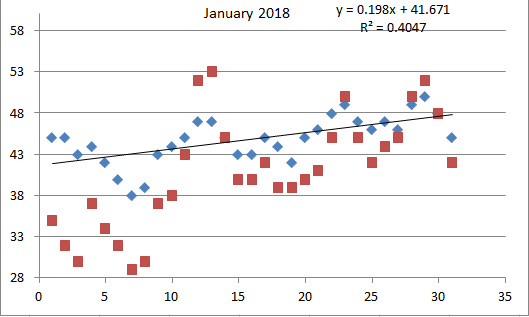