Surf at Bogue Pier ranged from high of 84-degrees to a low of 77-degrees with an average of 80.8-degrees (blue diamonds). By the way 77 was the most popular temperature for the month. Bogue Sound had a high of 86-degrees and a low of 75-degrees with an average of 79.5-degrees (red squares). Interestingly average Bogue Sound and surf temperatures were often very close, and we had a usual number of days when both temps were the same. A fit to the surf temps gave a horizontal line with a negative slope of about 1/4 of a degree/day. We are in the falling temperature fall regime. From the middle of the month to the end we had persistent NE winds driving a massive mullet blow lasting about 2-weeks. There were also loads of anchovies, shad, silversides and shrimp in massively biblical quantities blown out of our sounds and creeks. out the inlets and along the surf. It was remarkable and fired up the blues, Spanish, some drum, ladyfish and speckled trout. 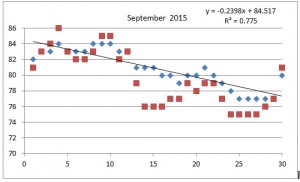