Fall on the Fly, By Dr. Bogus

One of the things about the fall…you can fly fish here all year around, but fall fishing can be special. I recently talked to one of our local guides and fly fishing experts Capt. Dean Lamont of Crystal of Coast Adventures, about targeting fall species on the fly.

Of course the first thing that comes to mind are the false albacore. We all probably remember when former president George H.W. Bush would come down here and fish for false albacore, so why don’t we start off with the obvious, false albacore. It’s become a real big fall fishery here along the Crystal Coast.

“It definitely has,” said Lamont, “I have clients that come from all over the northeast, especially Ohio and Massachusetts. Most of the guides will start booking their trips around the middle of October to assure their clients that they will have a good day fishing and book trips at least into Thanksgiving or later.”

“This year we had a large group of albacore for Labor Day actually that were from Bogue Inlet to Cape Lookout,” explained Lamont.

Where else can you find the albies? “Normally, I fish out of Beaufort Inlet, so usually I go west down the beach towards Pine Knoll Shores,” said Lamont, “we’ll also look around the artificial reefs, AR-315 and AR-320 and then around the Beaufort Inlet, along Shackleford Banks out the Beaufort shipping channel, the Cape Lookout Bight, up around the gun mounts up to the (Lookout) shoals, and if it’s nice weather a lot of times, fishing on the east side of the shoals can be excellent too.”

The false albacore, normally range from five pounds up into the teens and are real burners, so what kind of gear do you need to tame a fat Albert?

“Most of us use a 9 or 10-weight rod,” said Lamont, “and a wide arbor reel with either intermediate or floating line, because the fish are normally up at the surface chasing bait. Occasionally if the fish aren’t presenting themselves on the surface, then we do have to go down deeper for them with a weighted line.”

“You also need a pretty substantial reel with a good drag,” explained Lamont “or they will just burn your drag up in a couple of fish, they pull just that hard.”

How about bait? Flies? “Most of the fish this time of year are feeding on bay anchovies and silversides…smaller baitfish,” said Lamont. “One of the flies that has been my go-to fly in the last few years is called the gummy minnow. It’s actually made out of a synthetic real pliable material, and if you put it in your hand next to a bay anchovy it looks identical. As far as other flies are concerned, Clousers, smaller Clousers, they have a color that’s called tutti-frutti, that’s chartreuse, white and pink, sometimes I put some purple in it. Anything where you have a stripe down the side to represent a silverside.”

How to you find the false albacore? “Normally what we see first is the birds flocked over the water diving down,” said Lamont. “I’ll approach the fish as slowly as I can, and figure out which way the wind is blowing, and which way the fish are moving. Unfortunately when we get into the prime season, and there are a lot of people and boats out there, we get a lot of people what we call “runnin’ and gunnin” which isn’t good. You really need to approach the fish very slowly, creep up and let the fish come to you, then hold on for the ride.”

Another species we target in the fall and in fact through the winter is the speckled trout. “I can remember a few days when you and I fished the Cape Lookout Rock Jetty,” reminisced Lamont “and what we do is we anchor up and normally use an 8-weight rod with a 300 or 400-grain sinking line, and you cast the line and the fly towards the rock jetty and let it sink all the way down to the bottom and strip it in very-very slowly. The speckled trout have a much more subtle bite that a false albacore who will kind of pull the rod right out of your hand.” 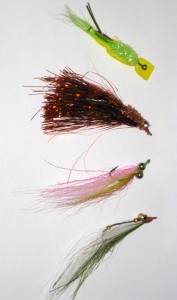 “As far as flies are concerned,” said Lamont, “I usually use a pink and white Clouser with a little flash in it can be really good.”

You mentioned the Cape Lookout Rock Jetty, but it can get pretty crowded out there, what are some other target locations for speckled trout. “Normally where there is structure,” said Lamont. “The speckled trout like to be around structure and shallow water, like the Shackleford Rock Jetty, the Ft. Macon Rock Jetty, down the channel going into Beaufort on the left hand side there’s a rock jetty there along Radio Island that runs all the way down along the bank there, any creek mouths, and places like that are very effective finding trout.”

Another species to target in the fall and again through the winter is the red drum, our state fish. “The red drum are more normally down along the bottom, said Lamont. “We have to cast in to the shallower water and let the fly sink down with something like a copperhead or Clouser. If a drum is there they will hit it, they are not really picky. And if your fly is near the bottom, you likely get a flounder to hit it too.

How about surface flies? “Yes, they work good for drum,” explained Lamont, “and I forgot to mention that for the albacore too, you can use a crease fly or a gurgler or something like that on top. That’s really a lot of fun, having them hit top water flies.”