Fishing the surf and pier and backwaters with artificial baits, from the Top Down by Dr. Bogus

While fishing the surf or from a pier or in a boat you can “scout” around looking for fish, but remember the fish don’t only distribute themselves (feeding or traveling) horizontally (laterally)  from place-to-place but also vertically within the water column…from the top down…the top, the bottom and everything in-between.

Let’s start on the top with top-water baits. These lures are visually the most fun way to get a feeding strike from a fish, especially those baits with that walk-the-dog Zig-Zag motion across the surface, and driving the fish crazy.  Even the names are catchy and inspirational like Top Dog (and its variants, Top Dog Jr., She Dog) , Zara Spook, Badonkadonk, Skitter Walk, there are others. There are other top-water baits like poppers (Popa Dog) and pencils,  that float or sink (to avoid birds picking them up) and push and splash water creating a ruckus like a fleeing baitfish on the surface, often noted by lurking hungry fish.

What hungry fish? Stripers, blues, Spanish, red drum, speckled trout are my main targets. One of my favorite once-in-a-lifetime epic days, me and two of my fishing buddies caught and released nearly 60-red drum on MirrOlure Top Dogs in the fall North Carolina surf. It was magical, especially realizing that the puppy drum have inferior mouths, that is downward facing mouths, typical of bottom feeders. Yet they were swarming fighting for the privilege. Of course nothing beats stripers or gator blues on top-water.

When working these baits, try varying the speed and intensity of your retrieves to see what elicits a strike. And if you get a miss, DON’T stop, keep your bait moving. I have had many fish hit a surface plug multiple times and/or other fish join in the action, so keep the bait twitching and moving.

Now for the middle of the roaders, the so-called suspenders (not just for grandpa anymore) for working the middle of the water column. A few years ago I was at a fishing club meeting where Don Willis (Custom Marine Fabrication, New Bern, NC) was the guest speaker talking about new fishing tackle and gear he saw at the recent manufacturers’ tackle trade show in Raleigh, NC. He showed us some cool stuff, and also made an observation that I think was right on. He said “Berkley Gulp! and suspending baits have turned mediocre and poor trout fishermen to good trout fishermen.” Just think about it, anyone can almost catch just about anything on the Gulp! flavored baits, and suspending hard plastics baits are recent proven killers of trout, drum, stripers, blues and you name it. Particularly, the suspending baits, like MirrOlure Catch 2000, or their 17 and 27-MR series are also equally deadly. You throw them out and let them sink (they don’t really suspend, they sink slowly), add a few twitches and during the pause and drop-down “sleep phase”, and they are nailed by hungry, aggressive fish, spring, summer, fall and these slow moving baits are even deadly in the winter for even sluggishly cold fish.

Some of the original suspending baits were designed and made by Paul Brown way back in 1974, the “corkies”. These were soft plastic mimics of hard plastic or wooden baits of the time, with cork in the interior to adjust the buoyancy to float or sink slowly, and were known dubbed as Gumbys with fins. Today these baits are still available with some new twists including “corkie” (i.e., Soft-Dine) versions of the popular 17-MR MirrOlures that are great imitations of small shad or peanut bunkers. They also come in smaller (14-MR) and larger sizes (27-MR, Catch-5) as menhaden imitations as well finger mullet imitations such as 20-MR, the 22MR Catch 2000 Jr. and Catch 2000. By the way, the 17-MR MirrOlure so called suspending bait actually sinks at a rate of about 6-feet in 10 seconds, I measured it.

Suspending baits, that is slow sinking near neutrally buoyant baits, are one way to attack the middle depths between top and bottom, but lightly weighted (1/16, 1/8-oz. lead heads) or unweighted flavored and/or soft plastics baits are another approach. There is however some finesse when fishing these baits. These and other soft plastics are also excellent producers fished on the ultimate of suspending baits, the cork where you have total control of the movement and motion of the bait. If you fish these often you will quickly notice that most of the hits occur in the settling and drop down phase, when nothing is seemingly happening. So fish both the corked and uncorked baits slowly and only twitch the baits from time-to-time. Ditto with the suspenders, and I don’t mean the ones that hold up your pants. Cast, let the current or wind drift the bait when possible, occasionally twitching the bait. Again in the “sleep” phase is when you should expect the hit, bite or bump, so be ready or you may miss the fish. And by the way, these suspending baits, corked or not, especially in cold water, are best fished with a non-stretch braided or low stretch fishing line with a fluorocarbon leader.

Now we need to go down the ladder and attack the bottom rung of the water column where the bottom dwellers live and feed. First are the lipped and sinking hard plastic stick baits. MirrOlure’s traditional 52M and TT baits and their newer fancier Series III versions of these baits, along with YoZuri’s Crystal Minnows, Rapala’s X-Rap and the classic, not just for freshwater, the saltwater Rat-L-Trap. There are many others. The lipless baits are cast, sink and twitch and retrieve baits with your twitching providing the life like motion of an injured bait fish. Frequently I get hits on the way down, so I always let the bait get to the bottom before I twitch and retrieve.

The lipped baits are pre-programed to do their thing, to imitate an edible bait fish, so mostly I just crank it at various speeds. As always it is good to put your bait, lipped or not, through its paces. See how fast it sinks, see how it moves when you twitch it or during a steady retrieve, crank it fast crank it slowly and see if the bait vibrates or wobbles, even many non-lipped baits vibrate at certain retrieve rates. So know thy bait!

Now for some of my favorite lures, the heavy metals. This family of versatile baits can be made to imitate nearly any baitfish out there and catch nearly any predatory fish. Everything from slim sand eel and Atlantic silverside and bay anchovy jigs, diamond jigs and Deadly Dick lures to wider profile spoons like the Crippled Herring, Krocodile, Hopkins and Hopkins Shorty, the Johnson Silver Minnow Weedless Spoon and my favorite the Kastmaster, all to mimic peanut bunkers and/or other wider profile forage fishes. These baits can be used to target false albacore, Atlantic bonito, blues, Spanish mackerel, stripers, summer flounder and gray trout and I also use them, especially the gold ¾-ounce Kastmaster to target spotted sea trout and red drum from the surf. You can see also see that I mentioned everything from typically top-water predators like false albacore and Spanish mackerel to bottom dwellers like summer flounder and gray trout. Yes, these baits can be effectively worked throughout the water column by varying retrieval speed and height of the rod tip as you “look” to find where your target fish are feeding. Frequently I will stop my retrieval and let the metal tumble down to the bottom like an injured fish, and then rip it off the bottom and continue my retrieve.

In general these baits, which range from a fraction of an ounce to several ounces, are found in silver or gold, some have other colors like the blue stripe on a Kastmaster and many now sport holographic reflective tape. My preference is holographic gold tape, with a fish scale pattern. It really jazzes up the metal lure and dramatically increases its visibility for fish that see first and eat second. Other typical reflective tape colors commonly available in your local tackle shop include blue, green, red, silver and even purple.

Finally we have the bottom dwellers, the lead-head jigs that are jigged and dragged along the bottom. These are baits can be used as single lead head from 1/16-onuce to one-ounce depending on conditions and water depth, tipped with a replaceable soft plastic or flavored bait like Berkley Gulp!. They can be made in tandem where two lead-heads are tied together with a dropper loop in between or as a tandem rig with lead-head and teaser fly. These also can be made with soft plastics that are pre-molded over a weighted hook. Some of my favorite pre-molded weighted soft plastic baits include Storm’s Swimming Mullet, Betts Halo Shad and for shrimp imitations some of the most popular include the new Vudu Shrimp, DOA Shrimp, and both Storm and Betts both have great looking plastic shrimp baits as well.

In the summer I like to fish for summer flounder both in the ocean surf, from any of the ocean fishing piers and from my kayak. My go-to artificial bait for flounder is the tandem rig with a soft plastic or Gulp! bait (swimming mullet, shad or shrimp) on one side and a teaser fly that is a mimic for the Atlantic silverside or bay anchovy, on the other side.

What are the “best” colors for any or all of these artificial baits? Just keep is simple, you want something light in color, white is a good start, you need something dark, black is not a bad choice and of course chartreuse. If it ain’t chartreuse…you know how that goes!

So the next time you go fishing have a vision of the vertical water column and work the ladder from top to bottom to find your target trophy. 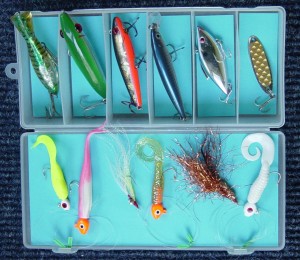