So I went out fishing the other day, tried top-water bait for a red drum and landed a feisty slot 23-inch red, however I struck out using live finger mullet for flounder only catching a few undersized 12- or 13-inch throwbacks, and all the time I was thinking It would be nice if we had a good run of speckled trout along the surf this fall. We have all had successes and failures and we have all dodged the minefield that is the moving target of fisheries regulations. By the way, there’s an APP for that!

Effective fisheries management requires real fish-data to assess the viability of important commercial and recreational species.  Stock assessments to attain breed stock, mortality, age and population distributions act as data to be inputted into complex models to assess the health or not of various important commercial and recreational species as flounder, gray and speckled trout, red and black drum to name just a few. Data to be used come from many sources such as fish tagging studies, fishermen onsite fishing pier, marina, boat ramp and phone surveys, commercial trip tickets and now more recently the North Carolina Division of Marine Fisheries (NCDMF) has instituted a recreational carcass collection program. Yes, you now have something to do with your dead fish carcasses that don’t involve crab bait!

I recently talked with Randy Gregory on my radio show (WTKF 107.1 FM 1240 AM, every Monday morning at 7:30 AM) about this relatively new program. Randy is a fisheries biologist who has worked in NCDMF for over 27-years and currently runs their age and growth laboratory. You may have even seen him at various fishing tournaments around the state including the Governor’s Cup Billfish Conservation Series which includes the world renowned Big Rock Blue Marlin Tournament.

As Gregory points out, “We can’t go out and have a census for fish. We can’t go and ask how old they are how many fry they have in their house and those kinds of things, so what we do is build an idea of what the age structure of the population looks like and then through our catch and through our landings we try to figure out the numbers of each of those fish in those age groups.”

How does the carcass collection program do this? “First we’ve gone out and placed freezers at marinas and other places where recreational fishermen will congregate, tackle shops, things like that.” said Gregory,  so in the local area, here around Morehead, we have a place at Harker’s Island, we have Freeman’s Tackle over in Atlantic Beach, Dudley’s Marina down in Swansboro. So those are our collection centers and what we want people to do is bring us their recreational catch after they fillet it.” 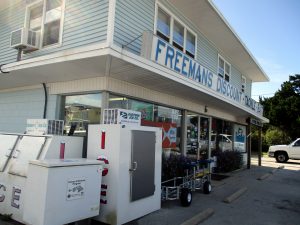 After they filleted  their dinner out?  “Yes,” said Gregory, “we just need the rack, we just need the carcass! But we need the head but we need the whole length, so we need to figure out how long it is, what the sex of the fish is. We don’t need a whole lot of information for that so anybody that normally fillets their fish we can usually figure out most of them.” 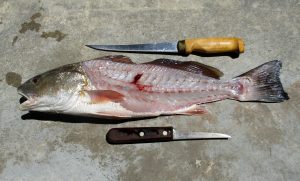 So I’m a fisherman, I cleaned my fish, what do I do then? “We want you to fill out a catch card,” explained Gregory, “it gives us a little information about you and about where you caught your fish which is always something that we need. And we have freezer bags and you can put your filleted catch in the bag and you tie it up with a little red tie and throw it in the freezer and we come around when maybe somebody call us and says they have some stuff in the freezer.” 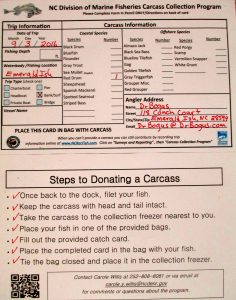 How about feedback? “If we get a good sample,” said Gregory, “we let them know. Fresh is always better, I want to stress that, we want it just like you were going to eat it, and you put it in the freezer, because when things deteriorate we have trouble.” 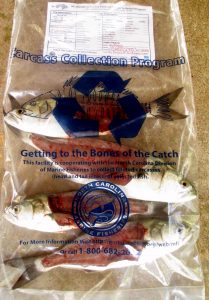 Now I know you can’t go out in the sea and ask a fish how old it is, but if you have his carcass how do you find out how old he is? You filleted him out and he’s still not talking! “That’s why we need the head,” explained Gregory, “in the head they have an ear stone and it’s called an otolith and they put down rings like rings on a tree, and that’s what we use to age the fish.”

Like yearly growth rings?  “Yes,” said Gregory, “and basically the otoliths sit in a sack, in the base of the brain and ride on some little hairs and they act as the fish’s ear bone and they also use it for balance. They are made of calcium carbonate and are every hard. Some of them are quite large, the fish in the drum family, the trout and the drum have very large otoliths, Spanish mackerel and bluefish are quite small.”

Then what, I asked? “Sometime we can look at them whole with some species, other species we have to cut them with a rock cutting saw. The bone is very hard and can be brittle but it’s hard and we use a diamond wheeled saw, just like you would cut rocks with or metal.”

So you cut through so you can look at the “tree” rings and count them? Yes,’ said Gregory, “usually under the microscope and sometimes it takes a little bit of work to get to that but usually it’s fairly straight forward.”

Gregory noted that in 2015, they had over 1000 fish deposited into the carcass collection program. With Freeman’s Bait and Tackle in Atlantic Beach leading the way.

With all these fish did you have any unexpected results? Any eureka moments? “Yah, actually a really cool one that I didn’t expect. A couple years ago the South Atlantic Fishery Management Council was managing sheepshead, and decided they weren’t going to do that anymore. So the sheepshead was kind of on a hot plate, like what are we going to do with this fish, should we enact some regulations and things like that, so I personally didn’t know a whole lot about sheepshead other than I really like to eat them and I like to catch them and they are hard to catch. So one of the things that we started doing, and we realized and getting sheepshead carcasses, getting the age structures out of the sheepshead was going to difficult, because not many are landed commercially, not many are landed openly recreationally because sheepshead fishermen are pretty secretive. So we added sheepshead to the carcass collection program…amazingly some of these big sheepshead can be quite old. It didn’t really know it before. I did my research and turns out we have some fish that are 30-years old, some 8-, 9-pound sheepshead. That’s a big sheepshead but not extremely rare, but a slow growing fish. They grow pretty quick up to a point, they get a couple of pounds and then they really kind of slow down, so that was the coolest thing it think that I saw what we are doing with these species.”

Do you do tournaments too like the Big Rock Blue Marlin Tournament? “Yes we do,” said Gregory, “we are at tournaments, we were at the Carolina Beach KMT, the East Coast Got ‘em on Classic this weekend, and then I was in Hatteras at a billfish tournament the Hatteras Grand Slam Tournament, so tournaments are another place that congregates recreational fishing and catches and allows us sometimes a good way to sample.”

People always ask what happens to the tournament fish, like from the Big Rock. “We would consider blue marlin a rare event species,” explained Gregory, “not very many are landed. Matter of fact there is a federal law that says only 250 blue and white marlin can be landed in the Atlantic by US fishermen, and we only land about 160-, 170-fish a year. So we take every opportunity that we can to get information off these fish.”

So when nine blue marlin were landed in the Big Rock Tournament this year (2016) that’s a pretty significant number then?  “It is,” agreed Gregory, “but what we do is to work with the North Carolina Governors Cup  program that the DMF has with the state’s big bill fish tournaments throughout the state and what we’ve done is along with the Big Rock BMT we’ve worked with North Carolina State University to bring researchers to get all the information that we can not only off the blue marlin that are landed but also the other game fish that were landed. So we had this year at the weigh station a whole group of veterinary technicians, we had biologists, there were probably a dozen people working on these fish when they came in. And then the billfish actually go back to the Center for Marine Sciences and Technology lab (CMAST), to the NC State Lab and there is all kinds of information they’re getting off those fish like their diet, tissue and a dozen different things that they are doing all at one time along with their age including the winning 600-pound blue marlin.

So how big is the otolith of a 600-pound marlin? “Well,” said Gregory, “only a couple of millimeters long, they are very difficult to age.”

So if you want to enter the realm of citizen scientist and help our understanding of the North Carolina’s important recreational fish species, it’s time to put your discarded fish carcasses to good use. Fillet it, bag it, freeze it and donate it to the NC Marine Fisheries Carcass Collection Program.

For more information on the Carcass Collection Program, log onto: http://portal.ncdenr.org/web/mf/carcass-collection.