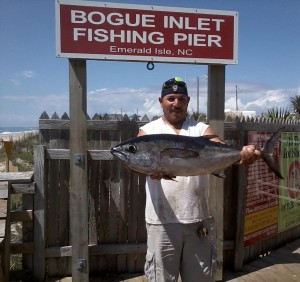 Maurilio Marquez is a construction worker from Cary who has enjoyed fishing in Emerald Isle for the last 18-years. Marquez, who started king mackerel fishing just six-years ago may have already had his best season, and it’s only April.

Equipped with his new Shimano reel packed with several hundred yards of tough braided line and a green headed Got-Cha plug he was ready for a fun day of pier fishing. Out at the end of the pier, he watched as “false albacore” were jumping and feeding some 500-yards out. After about 20 minutes they got close enough to the pier to cast the Got-Cha plug to them.

“I tried one time and didn’t get anything,” said Marquez, “I tried a second time and one of them just swallowed the Got-Cha plug and just took off taking about 200-yards of line.”

According to Marquez, the fish went right then left, then right and left again and even went into the beach twice, somehow avoiding a lurking buoy just 200-foot out from the pier.

“That’s when I tightened the drag a little bit,” said Marquez, so I could get him in, I figured it was tired already.” And so was Marquez, his arm was starting to give out after the 75-minute battle.

By that time they could see what it was, a false albacore, a king mackerel, no a tuna fish!

“Finally we brought him up,” exclaimed Marquez, “and there was so many people taking pictures. What I enjoyed most of all was the crowd of people that you have around. They were all cheering and when you catch the fish they applaud, and that’s the joy I get when I catch a big fish.”

Once on the deck, the “false albacore” turned out to be a 21.75-pound citation blackfin tuna. Unusual? Pier Owner Mike Stanley said it was a first on Bogue Pier, after over 50-years of operation.

I asked Marquez if he ate the tuna. “Yes sir,” laughed Marquez,” and oh it was so good.”

By the way, the blackfin tuna was legal for Marquez to catch and keep. It is a tuna that doesn’t require a state or federal permit.

One Response to “Pier Fishing for Blackfin Tuna!”