Blowfish, the bad the ugly and the tasty Dr. Bogus 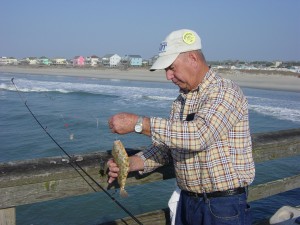 One of the first harbingers of spring for us fishermen along the Carolina Coast is the return of lowly puffer fish. Okay, they are not pretty, eat anything they can get their mouths on, average only a pound or less, don’t put up a good fight, or any fight for that matter, but they make up for all of that by providing some of the tastiest morsels that come out of the sea. Also known as blowfish, blow toad or swellfish and technically the northern puffer or scientifically Spheroides maculates, they return to us in the late winter or early spring, when we need them the most to recover us from the long winter doldrums. I recently ventured out onto the recently opened Bogue Inlet Fishing Pier in Emerald Isle, to hunt down some “puffer experts” to get the skinny on blowfish. 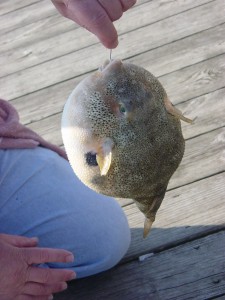 It was the first day of spring and as luck would have it, I came across the only two hardy anglers there that day fishing for none other than the puffers, so I sat and talked to Bob Young (Hubert) and Bob Ludwig (Cape Carteret), both Yankees originally from the cold white north of New York City, both grizzled puffer fishermen from long ago and far away.

“They are the best eating fish you can catch,” volunteered Ludwig, “I’ve been catching them since 1955, up in Captree and in Center Moriches, right on Long Island.”

Not to be outdone, Young interrupted, “oh, I been catching them since I was about eight, nine-years old, and that’s quite many years back. My dad and me used to go out to Sheepshead Bay, right out there in Long Island Sound. We used to fish them all the time,” confirmed Young.

We know that they are an early spring fish, but how about the rest of the year. “Yes, you have a winter season too,” said Young, “in the wintertime or spring in the colder seasons, you catch them in closer to the beach, but during the summertime you catch them out in the deeper water.”

Ludwig noted that he was in puffer heaven late last fall. “I caught about 150 in three days right here on the pier in the cold, last December, exclaimed Ludwig.” By the way, the puffers freeze very well too, so that was a 150-tasty morsels for the winter.

Gear and bait are pretty straight-forward agreed Young and Ludwig. Just a simple hi-lo two hook rig and a three or four ounce sinker will do the trick. The only real trick on the gear is to use a long shank hook, as Ludwig explained, “I use a long shank No. 4 hook because it goes deep in their mouth and you can hook them better. I use a long shank for that reason, otherwise they will just chop it right off.”

Young agreed, “If you have a short-shank hook, they’ll cut your line right in half, and you won’t come back with a fish. You’ll come back with just an empty line. Use a long shank hook and you’ll come with more fish,” said Young.

Neither is the bait exotic. “I like shrimp like everybody else,” said Young, “you can also use this artificial bloodworms (Fishbites, Bag o’ Worms), they’ll work just as well. They are a bottom feeding fish and they will eat anything you throw at them, they’ll eat squid, shrimp or whatever, anything.” 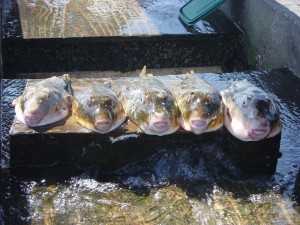 The blowfish are willingest of victims, one of the least fussy eaters, the gear is not rocket science, but this is where it gets interesting…cleaning the beast.

“It’s a tough, job,” sighed Ludwig, “they will take the skin right off your hands. I always wear a pair of gloves when I clean them. Their skin is about 10-times rougher than sandpaper!”

Young agreed, “Really, their skin is rough,” said young “you got to use gloves and good sharp knives. The easiest way to clean them that I found, and I’ve been fishing them for a long time and cleaning them, is to cut them (from the top) right behind the gills, and cut them right down to the bottom skin and then turn your knife away from you and run the knife right down the fish and the skin will peel right off.”

“You just rotate your knife as you pull it to the back,” explained Young, “while holding the head, and the skin comes right off and you end up with what we call a chicken leg. It looks just like a chicken leg, all nice and clean.” 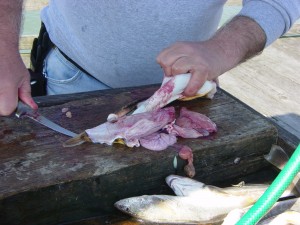 Recently the desirability of the delectable puffer is spreading, and with the toxicity myth our northern puffer dissipating has lead to a dramatic change in attitude to the once feared puffer. 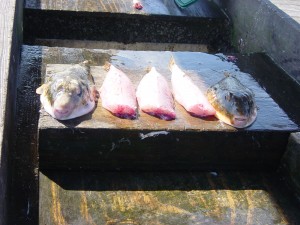 “When I first came down here, which was six-years ago,” explained Young, “you used to be able to find them (discarded) all over the pier. People didn’t want them, they were scared of them, and they read all these newspapers from Florida that said that they were poisonous. They really aren’t poisonous. These are the northern puffer fish that come down this way and are very good eating. As far as I’m concerned, they are one of the better eating fish.”

Ludwig chimed in, “now when you just get them out of the water, people want them. Now they are asking if you want them, even before you get them off the hook!”

Now for the culinary. Both Young, and Ludwig and other blowfish coinsures confirm the great taste of the northern puffer fish. Chicken of the sea, sea squab are designed to hide the “puffer” heritage of the fish, but the taste is tops and the rule is the KISS proverb, “keep is simple stupid”, and simplicity is the best preparation.

Some just sauté in butter, I like to lightly coat in flour and sauté, in butter with a little lemon juice…simple. Young’s wife Alice keeps it simple too. According to Young, ‘my wife dips them in an egg-wash then coats them in some Italian flavored breadcrumbs and then browns them in butter and olive oil. When we put them out for guests with some other fish and don’t tell anyone what they are, they are always the first to disappear,” smiled Young, thinking of his next meal.

Oh the puffing, it’s for protection, they can suck in water and puff up to a large spheroid when threatened by a potential predators. On the pier they suck in air, I guess in response to human predators. “If you bring one up and you tickle its belly,” explains Young, “or rub its belly, it will blow-up like a basketball. As a matter of fact, it you drop it on the deck, it will bounce.”

As far as North Carolina regulations, unlike most fish, it’s quite easy; there are no size or bag limits.

And just to clarify the toxicity of puffer fish, according to US Food and Drug Administration, Center for Food Safety & Applied Nutrition (FDA-CFSAN, http://vm.cfsan.fda.gov/~mow/chap39.html) poisonings from the puffer toxin, a.k.a. tetrodotoxin, have been almost exclusively associated with the consumption of puffer fish from waters of the Indo-Pacific ocean regions, there have been no confirmed cases of poisoning from the Atlantic puffer fish. Other remote species of the family Tetradontidae which includes many species of puffers that are notably toxic, such as the Japanese torafugu (fugu rubripes), should be avoided (see article link below).

Locally, there is one puffer family that should also avoided, it is the burrfish. “When fishing for puffers,” Young said, “about one of every ten will be a burrfish. You can tell them apart, they have a square nose, that’s how you recognize them, more square than oblong like the puffer. They also have spines, they’re really spiny. The thing is to watch out, and don’t go playing with them or eat them, they are not a thing you want to eat,” said Young.

Ludwig echoed the sentiment, “they really have sharp thorns on them,” said Ludwig, “I’ve gotten stuck by them, now I use pliers to get the hook out of them. I use a rag and pliers.”

So now is the time for tasty treats, chicken of the sea is on the menu, but if you come down to Bogue Pier looking for puffers, these days you’ll have catch your own, and don’t ask Bob Young or Bob Ludwig if they want to keep theirs, you already know the answer!

One Response to “Pufferfish Primer”