The lore and names behind the Rocks of the Crystal Coast,

By Dr. Bogus and many thanks to Capt. Lee Manning.

There’s an old adage good fishing and structure go hand-in-hand. Food and shelter beget little fish, which beget bigger fish and so on to the biggest of fish. This goes for freshwater, saltwater, inshore, offshore and any shore you want to mention. North Carolina, appropriately known as the Graveyard of the Atlantic, is awash in structure with wrecks, reefs and rocks that dot our coast from north to south. The central Crystal Coast region of the Old North State is particularly notable due to the proximity of natural near shore rocks and reefs readily accessible to the weekend small boater. Near shore rocks like Lost Rock, Christmas Rock and Honeymoon Rock are local fish havens and popular and productive fishing locations, but did you ever wonder how they got their names? I certainly have!

To demystify this lore of the sea, I consulted Capt. Lee Manning; a former schoolteacher turned charter captain over 30 years ago. Capt. Manning currently operates the Nancy Lee Fishing Center in Swansboro and his experience not only holds the key to finding fish, but a long resident of the area, he has absorbed much of the local lore of the rocks and reefs as well.

Highlighting the accessibility of these fishing structures, Manning said, “Well, we’re fortunate, out of Bogue Inlet that we have a lot of rocks that are close to our inlet, probably more than most areas around here. We have probably six or seven that are within four, five, or six-miles of the inlet and most of them are rocky bottom and most of them have coral on them.”

When asked how close is close, Manning said “The closest rocks are probably Station Rock and Keypost within just two or three-miles from the Bogue Inlet. Super fishing, all kinds of fish like flounder, sea bass and a little bit of everything and of course in the spring and fall we have the king mackerel that come in along with other fish along the shoreline too.”

As fisherman, we’re always interested in what the bottom really looks like. In response, Manning said that “I’m not a diver, so I have my own imagination. I imagine what it looks like. Over the years, we catch pieces and it looks like rock. Some of it looks like shell rock, like it’s cemented together, when you pull it up, some is coral. Most all the ledges drop of five, six maybe seven-feet, at different points of the rock areas.”

So how did some of these rocks get their names? “First of all, Station Rock,” said Manning, “got its name years ago before we had the Lorans and GPSs and all the sophisticated equipment. You would use the Swansboro Coast Guard Station; it had a tower on it, a lookout tower. You lined the tower up with the Swansboro water tower and you go straight out. With your “paper machine” which we had then, you would mark the bottom, plus you could use the line up with Bogue Pier and one of the houses on the beach (there was not so many houses on the beach back at that time), and you could find Station Rock real easy. So it was named because of the station lookout on the Coast Guard Station.” Sure makes sense.

Speaking of making sense, how about 45-Minute Rock? “Forty five-Minute Rock”, said Manning, “ of course back years ago most of the boats that went out, with the speeds they ran, it took about 45-minutes to get there. They timed it and they would check the bottom with either wax or pitch from pine tree resin on a drop line and check the bottom and find it where it was shelly or bring up little pieces of rock on it, and of course they would start fishing in that area.”

“Farther out is the South East Bottoms, but it is the same thing,” said Manning, “it’s generally the first set of rocks to the southeast after you leave 45-Minute Rock.” When asked about the area, Manning responded, “Southeast Bottoms is a big area, a real big area with a lot of rocks, just to the east, southeast of Charlie (“C”) Buoy.” When asked about the fishing the bottoms, Manning smiled and said, “In the summertime you have all kinds of fish there. You have sailfish, dolphin (mahi), there’s even been wahoo caught out there. There is some of everything caught out in that area. It’s really a super good area and a super good king mackerel area too.” And it’s less than ten-miles out of Bogue Inlet, just set a southeasterly course.

With the rock locations well known, most people make the mistake to fish right on top of them, but as Manning was quick to point out, “Most of the rocks, if you go around them and fish them a lot, you’ll find little outcroppings all around the area in any direction and over the years, as I fish more, I fish were the ledges play out and the bottoms play out and the fish seem to congregate there more than the main part of the rocks. Maybe it’s because everybody fishes on the main part of the rock and the fish have moved out around the edges.”

Since it’s presumed that the rock locations were well know, how did Lost Rock get its name? “Well,” said Manning, “Lost Rock, is a rock that the biggest part of the rock runs perpendicular to the shore and was always very, very hard to find. You could be real close to it but ride right by it, and it was located in such a place that it was hard to look at the shoreline and find line-ups. We would fish on it once or twice a year when we would happen to stumble across it. And of course, once we got the Lorans and GPSs we finally got numbers on it, it wasn’t lost anymore. But we called it Lost Rock, because we couldn’t ever find it.”

One of the best close-in fishing rocks is Keypost, which is found directly out from the end of Bogue Inlet Fishing Pier in Emerald Isle. Describing the Keypost manning said, “It is really a long rock. They call it Inner Keypost, Outer Keypost, there’s a middle part of it too, and it’s a real long rock that probably runs a mile, mile and a half, maybe two miles offshore. We caught flounder on all the Keypost Rocks this past summer, sometimes as many as 30 flounder a day fishing there, and the biggest one was over 7-pounds.”

But to unearth the name, you’ll have to go all the way back to World War II (WWII) when our coast was threatened by German U-boats. “Back there in WWII,” said Manning, “the people that were watching the shoreline walked down the beach, and there was a post down there with a key in it and a lock box and they had to go down when they walked the beach, they had to unlock it and had to initial the card that was in there and lock it back up to verify that they had made the trip down the beach. That was the “keypost” and out from there was the Keypost Rock!”

Some of the rocks have a bit of a personal touch in the name. “Right down the beach, past the Keypost is Tom Smith’s Rock,” said Manning. “Tom Smith was a shrimper years ago and he stayed tangled up in the rocks all the time with his net, so they called it Tom Smith’s Rock.” Definitely a local joke.

“There are some other rocks, said Manning, “like East Rock, which is just the direction we have to go out of Bogue Inlet to get to it.”

With Valentine’s Day recently passed, with all the romance, there is one name that comes up, Honeymoon Rock. Yes it’s what you might guess,” said Manning, “Honeymoon Rock came from…well, one of our captains, many years ago got married and that’s where he spent his honeymoon. He took the boat out with his new wife, anchored up…and that was Honeymoon Rock.” One wonders if there is a Divorce Rock too!

As we can see, some of the rocks are named by direction, location, landmarks and even tongue and cheek after “notable” fisherman, others from use. That includes Christmas Rock, but it may not be what you might think. “Christmas Rock, “ said Manning, “you have to go back years ago. The boys out of Sneads Ferry, when it would start getting to Christmastime, they needed money for Christmas, they went out with their fish pots and catch some sea bass and sell them. There caught lots of sea bass out there, and they always called it Christmas Rock.” And now it’s on the charts and we all know it as Christmas Rock.

There are not only rocks out there that hold and sustain our local fishery, but the marked and maintained artificial reefs and the to numerous wrecks too. However, Manning mainly sticks to fishing the rocks. Why? Manning was emphatic and noted that, “I very seldom fish the wrecks unless I’m trolling because so many people know where the wrecks are and they troll on them. Usually the wrecks hold barracuda and so you catch lots of half-a-fish! “Mainly the divers like to go there and recreational folks go there,” he said. “There are so other many placers that I can go, but if I’m going by there I’ll troll across it,” said Manning.

Now that we have demystified some of the history and lore of some of your favorite nearshore fishing rocks of the Crystal Coast, and with spring fast approaching, can a great season of fishing be far behind? After the trials and tribulations of last season, I certainly hope that 2004 is a good one. Then there is the BIG ROCK! You’ve heard of it, it’s a ROCK and it’s very BIG, enough said. 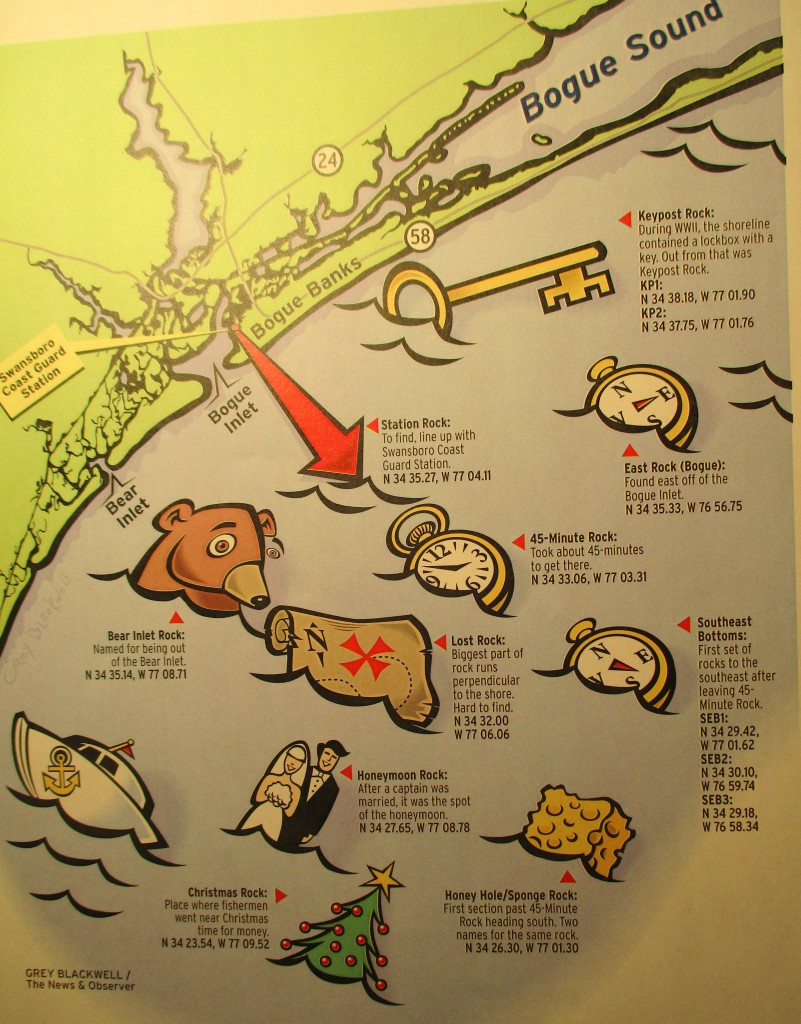