Bobbers, corks, and floats, not just for kids anymore!! By Dr. Bogus

Remember that big round red and white bobber that used to be a staple in you tackle box as a kid? You would float night crawlers down the creek and watch the red and white plastic bobber bob up and-down as it cruised the river in search of a bass or pickerel or bream. Or you might have gone down to the sound or dock or pier and float a silversides in search of a hungry snapper blue or two. Then somehow those bobbers somehow sunk to the bottom of
your tackle box doomed to decades of disuse. Well, if you haven’t already, it’s time to unearth the bobber for some adult usage. The first thing however is get the proper terminology, or as Capt. Jim (“JJ”) Johnson (Newport) reminded me, “we don’t call them bobbers any more, you got to call them floats now or you’re back with the kids”. Ok, a float it is, or maybe a cork, but not a bobber!

Today’s corks are made of many materials according to Capt. Rick Patterson (Cape Crusader Charters, Newport). “Most of them are made of hard plastic, Styrofoam plastic, balsa wood and some are actually cork,” said Patterson.

They also come in many shapes and sizes, from long thin pencil shaped floats to the traditional round bobber, properly fished, all of them are effective gear that should float near the top of every angler’s tackle box.

“It’s a good all-purpose rig actually,” explains Johnson, ”you can drift up along oyster bars for drum, trout and actually catch flounder on them too.” “That’s the main thing, keep your bait suspended and natural,” said Johnson, “it’s a good way to get your baits under and around structure too.”

What are the normal depths of use? “I don’t think floats are necessary in 2-foot of water, you can just flat-line your bait up in there rather than use a float. But I would say from two to three-feet to whatever you want to do, even, up to 12-feet out at the rock jetty at Cape Lookout, but typically it’s 4,5, 6-feet using a typical popping cork.”

There are a variety of noisy “popping” corks. “I’m sure everybody has seen a popping cork,” said Patterson “with the front end cupped out.” “You throw it out there and kind of jerk it along and it pops on the top of the water. It makes a little bit of noise. Some other companies, especially down south make some call the Equalizer and the Cajun Thunder that have a cork that’s on a stainless steel shaft and have beads that make noise too, which helps draw the fish to your bait,” explained Patterson.

“Ya, like the shrimp,” said Patterson, “if you’ve been back up in the creeks before, and you’re kind of easing along, the shrimp get up on top of the water and start skipping across the surface, and they’re kind of popping like that.” “Those corks that make noise simulate that, and of course that’s going to draw a trout or redfish.”

One of the favorite fishing areas is the Cape Lookout Rock Jetty, and many citation speckled trout are caught there in the fall and winter on corks. Here, Patterson likes one of the slender pencil corks, whereas Johnson prefers a Styrofoam Plastilite cork, with a straw in the middle. Since both slide freely on your main fishing line, they need to be “stopped” at the proper depth, about a foot above the bottom. How is this done?

“Many companies make them; it’s called a bobber stopper,” said Patterson. “All it is, is a piece of twine that you set above on your line and you pull (cinch) it down to tight on your line and put a bead below it. That way you can set the depth where you want to fish at, but it allows your cork to go up and down the line. If you want to set it up for 6 or 8- feet, you can slide the bobber stopper up on your main line at the depth you want to fish in. It of course reels through your rod guides real good and casts. It’s real effective,” emphasized Patterson.

For fishing line, Patterson uses one of the super-braids and Johnson prefers eight or 12-pound test mono, but both Patterson and Johnson were in agreement, fluorocarbon was the leader material of choice. Why? “Because some of the braided lines especially when we are talking clear water conditions …” said Patterson, I think the fish can see that and cut down on the number of strikes you get. That’s why I like to go down to the fluorocarbon, because
fluorocarbons are almost invisible in the water.”

Johnson added, “This is all light tackle fishing, for trout so I’d use 8 or 10-pound test main line, and if I use 8-pound line I’ll use 12-pound fluorocarbon leader, especially around the rocks or oyster rocks. I like to give it basically another one-third of what the breaking strength
of the main line is,” said Johnson. I’m a stickler with fluorocarbon when it comes to float rigs, it’s simply because of the oyster rocks, or you’re fishing around the rock jetty or pier pilings. I think it’s imperative to have that little extra abrasion resistance,” said Johnson.

For hooks, Johnson goes for the gold, especially when baiting live shrimp. “I prefer No. 6-gold treble hook,” said Johnson “and typically the trout won’t swallow it.” “I hook the shrimp either in the tail or right at the base of the horn between the two black spots, the brain and the stomach otherwise pfft… they’re dead. Fresh but dead,” smiled Johnson.

Shrimp, is one of the most popular baits to “cork”, but other live baits can be used effectively and artificials too. “Of course, next to shrimp, finger mullet, mud minnows … work great with slip corks,” said Patterson, “and for artificials, any type of plastic such as grubs, jerk baits anything like that.”

Johnson agreed, and also pointed out that late in the season, “Once the shrimp are gone mud minnows are the next best bet, and if you can get them little greenies, and mullet minnows if they are still around, all those are excellent live baits for trout and drum,” said Johnson. “After that, we also use little pinfish,” explained Johnson, “but we cut the dorsal fin off, the trout are very sensitive and they’ll spit a pinfish out sometimes, so you can help yourself out by cutting off the dorsal fin.”

Then there is the line of Berkley nearly natural, flavored, “Gulp!” baits. “Artificial baits now have gotten so realistic,” said Johnson, shaking his head, “baits such as Berkley Gulp! fished on a jig head under a cork, it’s an awesome rig.” Johnson continued, “They (Gulp! baits) have shrimp bodies and little pogies, some that mimic anchovies, and little crabs too,” said Johnson, “you can either put them on jig heads, or a treble hook, if fishing for drum you can use the Octopus or Mosquito hooks, just hook it up like a live fiddler.”

If this is not enough versatility for you anglers, floats are worked effectively from the bank around inlets, from fishing piers and even offshore. “As far as float corks offshore,” said Patterson, “they are good for Spanish mackerel, cobia and especially spade fish. You can find them later on in the summer out on all the artificial reefs or any kind of structure, and are really spooky but fishing a clear plastic float with jelly ball strips works great. They are a load of fun to catch, it’s like catching a gigantic 5-pound bluegill,” said Patterson.

Jesse’s record has since been broken by a 193-pound tarpon landed from Seaview Pier in 2008 by Malcolm Condie. 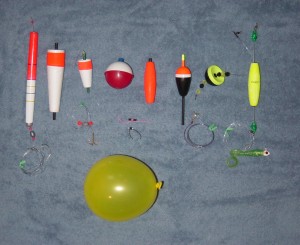 From Left to right:

4) Classic round red and white “bobber”

7) Rattlin’ Pop-a-Top float with 2-foot leader and No. 4 treble hook