Surf at Bogue Pier ranged from high of 69-degrees to a low of 57-degrees with an average of 61.7-degrees (blue diamonds) about 10 degrees colder than last month. Bogue Sound had a high of 66-degrees but a low of 47-degrees with an average of 57.5-degrees (red squares), nearly 12 degrees colder than October.  Temperatures in November were near or slightly above normal. Slope was negative showing a decrease was about 0.32-degrees/day. Since mid-November, my surf temperatures have been taken along the beach just west of the pier in the Western access in Emerald Isle since the pier is closed due to major renovations. I have a bottle I can cast from the beach to collect the water. 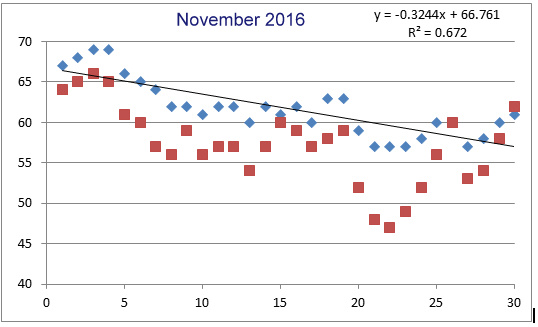