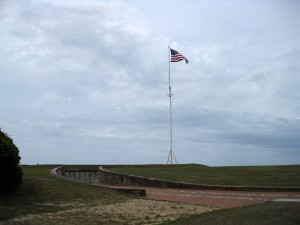 Ft. Macon State Park, on the far eastern end of Bogue Banks along Beaufort Inlet, became the North Carolina’s second state park in 1924, for the outrageous purchase price of one-dollar. Today the fort is one of North Carolina’s most popular, attracting over one million visitors a year, seeking out its long rich history, beautiful beaches and excellent seasonal fishing for the occasional weekender, out-of-state visitor or serious angler.

Recently while visiting the fort, I talked to Dick Cudworth, a frequent visitor and fisherman, who splits his time between Greensboro and Salter Path and asked him for a tour of the park’s fishing areas.

“First you start at the short jetty at the swimming beach,” said Cudworth, “it’s easy access from the parking area, and it’s a short walk to the beach.” “That short jetty has a good foundation of rocks, then there is open water from there to the big jetty (at the fort). One side (east) of the big jetty leads into the channel, which gives you a chance to fish in slowly moving waters to about 15-feet, then there is a drop-off, a drastic drop-off with quite fast moving water in the Beaufort Inlet all the way down to the Coast Guard Station,” explained Cudworth.

Like much of coastal North Carolina, fishing is year around activity, and that’s equally true for Ft. Macon as well.

“In the spring, just like the rest of the Crystal Coast,” explains Cudworth, “first is the bluefish run starting in April, and hopefully not too far from that is the Spanish, usually early May, and then the flounder.”

Like most of us, Cudworth will use live bait, mullet minnows, and artificials such as GotCha plugs or flashy metal spoons for the blues and Spanish.

For summer fare, Cudworth likes to target the flounder. Where?

“Around the rocks at the jetties,” said Cudworth, “either one of them seems to be an abundance of flounders, and this time of year, there’s reds in there too.” “Recently I’ve caught nice flounder, 16 to 24-inches from around the big jetty down to the Coast Guard Station.”

Cudworth is usually a traditionalist, using a Carolina rig and live finger mullet or live shrimp. “This time of year the mullet minnows seem to do a whole lot better,” says Cudworth, “there seems to be an abundance of pinfish, in the ocean and the live mullet minnows 3 to 4-inch seem to work the best, although I have used cut bait and had some success, and a lead-head jig with a white Gulp! 3 ½-inch shrimp. If it doesn’t seem like they want to hit one, you fish with the other, they seem to hit one or the other. One day it’s the minnows, the next it’s artificial, but my biggest citation fish have been on bait.”

As we get into the fall, speckled trout are the fish of the season along the Crystal Coast, and Ft. Macon is a traditional hot spot. When can you expect trout to usually show up? “About the middle of September,” said Cudworth, “and that’s a very productive time, actually all along the coast, but the Ft. Macon area has been really good on trout from the surf, and for some big ones too.” 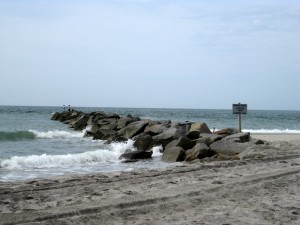 Of course the big rock jetty is the famed location for sharpies looking for fall specks, but it’s not for the faint hearted. “To me it’s a little, actually a lot, slippery, and dangerous,” said Cudworth shaking his head. “I don’t really enjoy myself there. Fishing along side of it is fine, but not so much fishing out on the jetty rocks…I just feel better with solid ground (or sand) under me. It’s for the younger guys, oh yah. Maybe in my younger days, it would have been a whole lot better. You could walk out on the jetty and look for speckled trout and flounder.” MirrOlures, lead-head jigs with soft plastics or Gulp! baits and live shrimp on a cork are the baits of choice for citation trout.

If it’s red drum you want, either jetty is a good choice, but for Cudworth prefers the small jetty at the swimming beach for legal size drum. “I have in the past, at the short jetty better success catching “slot” drum (18 to 27-inches)”, said Cudworth, “there again using the Gulp! bait on a lead-head.”

For tackle, Cudworth, like me, prefers the light variety. “I use a light and also a medium action rod, with open-face spinner reels,” said Cudworth, “I use 8 to 15-pound test line and fluorocarbon leaders. With the lighter weights, you’ll have a lot more fun, and I think you catch more fish that way too.”

Everyone has their favorite spots; driven by their desired catch, ease of access or just to enjoy a relaxing day.

Dave and JoEllen Labrosse have found fishing the fort both relaxing, productive and an easy day trip from their home in New Bern. They get down to Ft. Macon as often as they can and have done so for the last five or six years. Like Cudworth, they are not jetty jumpers either, but like to sit, relax and bottom fish. 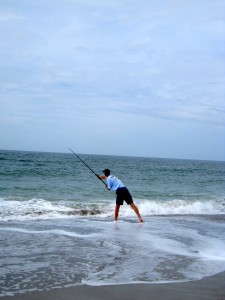 “We use bottom rigs, with cut bait, shrimp and squid, said Dave Labrosse, “we just like to catch fish, bluefish and pompano, pinfish and spots. For bait we like fresh shrimp and sometimes we cut up squid in small pieces.”

Their tackle is simple but effective, a couple of nine-foot rods, 20-pound test line and one or two-hook bottom rigs.

Where do they like to fish? “We actually usually fish right in the same spot, right where this first cut through the dunes is, just west of the big jetty,” said Dave. “Once in a while we’ll go around to the sound side. But most of what you catch over there is sharks, mostly little sharks, 10, 12, 18-inch sharks, black tips, bonnet heads, a variety.”

But just west of the jetty they have caught some nice fish. “This spring, I caught a Hatteras blue that was 28-inches, that’s a nice fish” said Dave.

“Last summer I caught a 16-inch pompano here,” chimed in his wife, JoEllen, “it was beautiful, they pull real hard. I caught it on shrimp. We ate that one and it was good.”

Not all fisherman’s wives fish, but JoEllen has fished for many years. “I’ve always loved to fish; I’ve grown up fishing,” said JoEllen, “my dad taught me back in Indiana from the time I was little. It’s totally different than ocean fishing here, and it took me a little while to get used to fishing the ocean, with the waves, currents and everything. I was used to fresh water.”

What does she like to catch? “Anything, anything,” said JoEllen excitedly, “but I haven’t gotten anything today, it’s too rough and a lot of that red sea weed, it’s a mess.”

After talking with the Labrosses, I walked east past the big jetty and down along the Beaufort inlet area where I found a young couple Ryan Willett and his wife Heather Lawson from Havelock enjoying the day relaxing and fishing on the beach.

“The family and I come down here several times a summer,” said Willett, “today I’m using shrimp and looking for sea mullet, maybe some hogfish, small things for the fry pan.” “Usually I prefer the rock jetty, where you can find trout, some flounder around the bottom; the sea mullet seem to collect around there better too, but with the family it’s a shorter walk to hit the point,” explained Willett. “Out here on the point I mainly use shrimp, squid or GotCha plugs if I can find some blues or Spanish working.”

Willett also likes to fish the big jetty for speckled trout and flounder. “Personally I’ve gotten some trout in the 20, 21-inch range, one on a mullet, one on a GotCha. Those are good days,” said Willett, “and for flounder, I mostly use mud minnows or small finger mullet. Live bait is key for those.”

Willett’s wife Heather occasionally fishes the fort but prefers fishing the inside creeks for red drum and flounder, but loves to visit Ft. Macon. “It’s great here, you can enjoy the beach, fish and there are the free concerts too,” said Lawson.