I was at a meeting of the Saltwater Light Tackle Fishing Club where Don Willis (Custom Marine Fabrication, New Bern) was the guest speaker talking about new fishing tackle and gear he saw at the recent Henry’s show in Raleigh. He showed us some cool stuff, and also made an observation that I think was right on. He said “Berkley Gulp! and suspending baits have turned mediocre and poor trout fishermen to good trout fishermen.” Just think about it, anyone can almost catch just about anything on the Gulp! flavored baits. And suspending hard plastics baits are recent proven killers of trout, drum and you name it. These days there are other flavored baits as well as special secret formula juices, pastes and sprays out there, to enhance your baits and attract fish, all of them work extremely well, and you don’t need to be a genius to use them. You toss them out, you bring ’em in and viola, you catch fish. The suspending baits, like MirrOlure Catch 2000, or their 17 and 27-MR series are also equally deadly. You throw them out and let them sink (they don’t really suspend, they sink slowly), add a few twitches and during the pause and drop-down, and they are nailed by hungry, aggressive trout, especially in the winter. 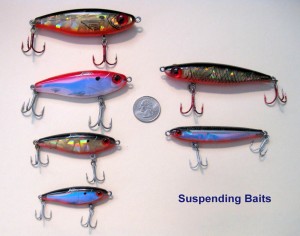 MirrOlures from top to bottom on the left (menhaden style):

MirrOlures on the right, top to bottom (mullet style): 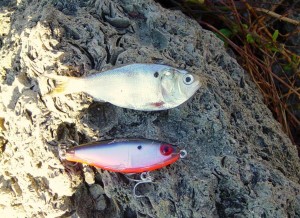 There is some finesse with these baits. I particularly like to use the lightest jig head with the Gulps!, usually 1/8 or 1/16th oz. or even better unweighted and fished weedless with one of the bass worm hooks. These and other soft plastics are also excellent producers fished on the ultimate of suspending baits, the cork where you have total control of the movement and motion of the bait. If you fish these often you will quickly notice that most of the hits occur in the settling and drop down phase, when nothing is seemingly happening. So fish both the corked and uncorked slow and low and only twitch the baits from time-to-time. Ditto with the suspenders, and I don’t mean the ones that hold up your pants. Cast, let the current drift the bait when possible, occasionally twitching the bait. Again in the “sleep” phase is when you should expect the hit, bite or bump, so be ready or you may miss the fish. All this is well and good, but you also have to remember, if there are no fish around, it really doesn’t matter what bait you use, finessed or not. 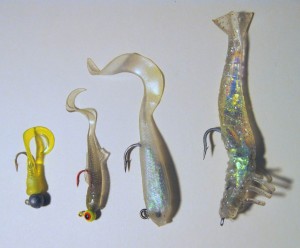 Soft Plastics fished on a cork

We are currently talking winter and early spring fishing, with lethargic fish that can barely produce a light tap or bump, and on somewhat slack line, one of the non-stretch braided lines is a must, or you risk missing fish. Personally I use 10-pound test PowerPro Braided line with a 12-pound fluorocarbon leader, others use 15 or 20-pound test braid with a matched fluorocarbon leader.

So if you want to improve your trout fishing give the new generation of scented baits and the flashy “suspending” baits a try and easily upgrade your catches from poor to wow! Of course this is all well and good, but you also have to remember, if there are no fish around, it really doesn’t matter what bait you use, finessed or not.