According to Jim Francesconi, Coordinator of North Carolina’s artificial fishing reef program, the program was started back in the 1970s, when it was mostly organized by coastal fishing clubs and local municipalities. But in 1984 the North Carolina’s Division of Marine Fisheries (NCDMF) fully assumed implementation of the program, including planning, permitting, construction, maintenance and buoyage.

“For much of the time,” said Francesconi, “we were working quite a bit on the ocean reefs, but early in 2009, we had to make a switch to concentrate on inside waters. Part of that, and I think the greatest aspect of it was a new demographic of users. People have been out in the ocean and have done very well and spent a lot of their life out there and enjoyed it, but some people are now looking more inshore, with a broad range of users. And the other thing is habitat. There are certain species that are very dependent on the estuarine waters so we’re very heavy right now making reefs with an emphasis on the habitat.”

As Francesconi described it, the switch is from producing fish attractors (ocean reefs) to estuarine fish habitat particularly important in development and nurturing juvenile fish.

“Your structure oriented fish in the juvenile phase,” said Francesconi,” is going to be primarily gag grouper. They are 100-percent reliant on estuarine waters for their early juvenile development, until about the four or five month age. But also black sea bass, although they are not 100-percent requiring reefs.”

First, the New Bern Reef (AR 392) was initially constructed in 1983 by Craven County and NCDMF and lies just down river of the Neuse River bridges. The original 27 acre site was constructed mostly with 100,000 tires and some concrete pilings. Increased usage and diminishing ability to hold bait and fish made it a good target for expansion. 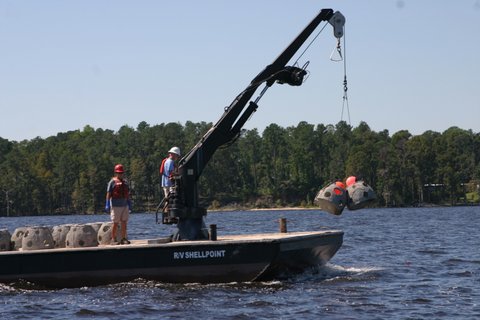 Reef balls being deployed at the New Bern Reef AR 392

“That’s a 63-acre reef site,” explained Francesconi, “it was a tire reef, and the tires have done fairly well on that site, there isn’t a lot of energy to tear them up, and there was a little bit of concrete piling, but what we’ve now put on the site is 500 reef balls. That was a big project, we had 500 reef balls, put down of 3-different sizes, and we had about 600-tons of marl-riprap limestone. Some of that funding came from the CCA (Coastal Conservation Association); we also put down a lot of pipe. We’ve still got some more room and some deep-water areas to fill and we have some more marl for that. We’re hoping that that’s going to be done soon.”

According to Francesconi, the New Bern Reef holds plenty of silversides and some larger baits and has mostly wintertime recreational fishing activity for Neuse River striped bass.

One of the newest reefs, AR 398, has been constructed on a site in the New River, and was constructed from concrete materials recovered from the demolition and replacement of the Buddy Phillips Bridge over the New River along Hwy. 17 in Jacksonville.

“The first material (from the bridge) went down in December of 2010” said Francesconi, “and that was about 40% of the processed material from the bridge, and when I say processed I mean it was broken, it was stripped of all the asphalt, they brought it down to the bare concrete.”

Size? “Concrete chunks were softball to cantaloupe size and some might be a little bit smaller,” explained Francesconi, “after it was cleaned, it was brought out to the site and we made mini-mounds, each mound was 1.8 cu. yards. The actual reef size covers 31-acres.”

According to Francesconi the reef was built in 7- to 10-feet of water or less and the mounds reach a height to about 5-feet below the surface and are arranged in a geometric patchwork pattern of small mounds. 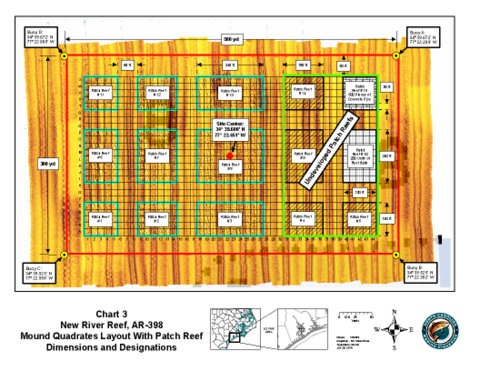 The question is how is the fishing? “It produced fish right away,” smiled Francesconi, “I guess within about 6-months, the first summer after it went down. Then in 2012, we put additional material down, the balance of it, and it’s been doing pretty good. It’s gotten real good reviews.”

Ricky Kellum, local New River trout fishing guide gave two thumbs up, “The REEF has been great,” said Kellum, “there are lots of trout on it.”

And the good news is that this reef was 100% funded by the by our saltwater fishing license fees (CRFL). Our fishing license money at work for us and this is only a start, as Francesconi reported, “We have a lot of irons on the fire right now.” So there is much more to come in the future for our developing estuarine reef program.